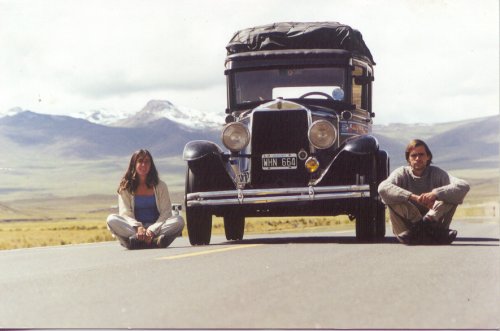 Simply one of the best travel books ever! ... be careful, it might "Spark your Dream" and nothing will be as it was before!

In January 2000, Candelaria and Herman Zapp set off for a half-year-trip from their home-country Argentina to far-away Alaska in a 72-year-old car ... Today, more than 14 years later, they are still traveling. They were outward bound as a couple and now, they're together with their four children that were conceived, born and raised "on the road" ...

The original plan of the couple knowing each other since they were eight was to go backpacking, but one night the question was raised, "Why don't we drive?" ... using the old car in their garage, recently purchased, unrestored, and Herman having no mechanical knowledge at all. ... Against all odds and being bombarded with comments from relatives and friends that they are "nuts", that their car would break down anyway just a few miles away from their house, they leave home with far too less money in their pockets it seems. On the first few miles, fears, confusion and uncertainty mix with a great feeling of power, freedom and belief into their dream.

"We say farewell to our home with a kiss and a pat on the wall. Now, all that's needed is that first step, the one to begin. I am so afraid and nervous; I don't know how I will be able to do it. -Nevertheless, everything is loaded, all set, all I need is a bit of courage. I look at Cande, who is talking with my brother; she feels my gaze and looks at me. Then I ask her:

"Let's go!" she responds. Her voice betrays she is feeling nervous, yet it sounds determined.

We approach the car, open the doors, get in and start the engine, which turns on immediately. We look at each other.

"Ready, honey?" I ask her, affectionately.

"Ready," she answers back in a confident way.

For the first time, on the first day of the trip, I lay my hand on the gearshift, slip into first and we take off, feeling something very strong. On one hand, I feel fragile, on the other hand very powerful, because I'm going for my dream. My brother and Luis follow us in their cars while we drive away, waving to our neighbors who insist on calling us "nuts."" (p. 14)

Of course, the 1928 Graham Paige car makes funny noises (maybe, they're just normal, but they sound "strange") and soon is in need of repair and even breaks down. Running out of money in Ecuador, they soon discover that as soon as people find out that the couple is following their dream, there are both help and new friends behind every next corner, hill or border. Every disaster turns out to be a gift opening up new connections to people and helps discovering literal or real by-ways leading to new places and new adventures; freely adapted from Shakespeare, "the cause of true love never did run smooth" ... By and by, unease changes into a feeling that by having faith in themselves and their dream, there will always be a way.

"There will always be prophets of failure, it's much easier to predict a ruin than a triumph. It's like a race where the safest bet is the failure of the majority than the triumph of only one. Don't listen to them, listen to yourselves. If you have faith in yourself, you're condemned to success" (p. 176)

To make at least some money to be able to go on traveling, they start selling Candelaria's paintings framed by Herman, and later, they sell calendars and the self-published book about their travel, the first editions of the very book I am writing about here. They travel complete South America including a voyage on a self-made and self-steered raft carrying their car on the Amazon from Ecuador via Peru to Brazil. Next, they ship the oldtimer-car over to Panama to travel Central and Northern America. On their way up North, as experienced before in South America, hundreds of personal encounters with all types of people lets them experience life fully. 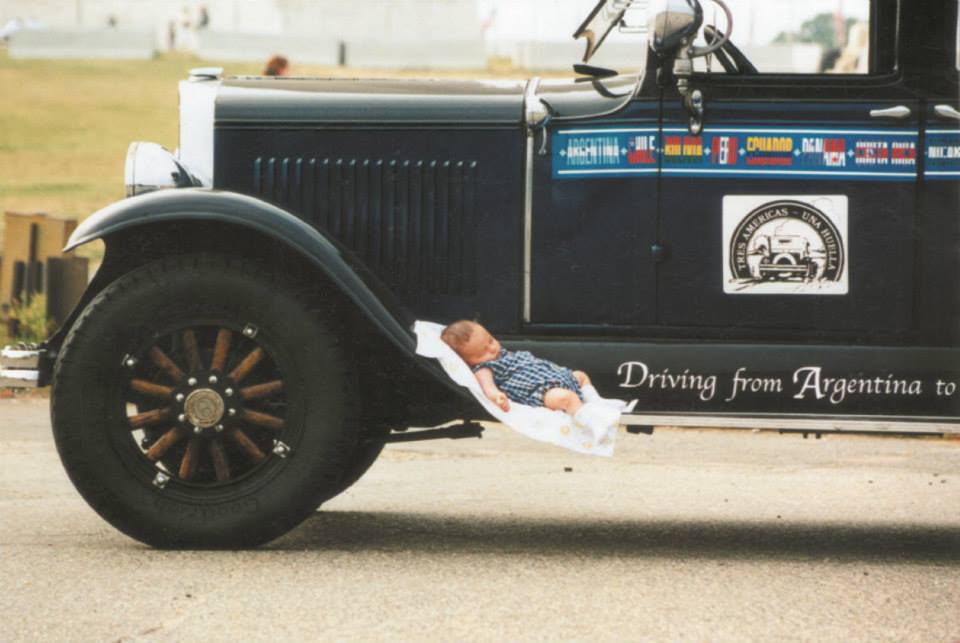 Their first son, Pampa, is born in the USA and help is only given after a press campaign following a depressing rejection by clinics, doctors et cetera ... "because there was no room for them in the inn!" Entering Canada seems to be a problem first, but they get help from dozens of people inviting them to the country. Finally, after having been guests in over 800 households in the Americas, they reach their dream-destination Alaska about three and a half years after setting off from Argentina ... only to ask the initial question again, "And what if we go in the car?".

All this is written in an extraordinarily personal and open style using an English with an emotional and picturesque Latin-American melody, which is constantly whisteling-in other tunes between the lines. Far from overdoing, being pathetic or esoteric, this books speaks from the heart to the heart, full of emotion, and both funny and thrilling.

What you should not expect from the book, though, are descriptions of any famous "sights". For the Zapps "sights" are rather the people they meet on the road and all experiences connected to these encounters.

It is very courageous that Candelaria and Herman not only sparked their dream, shared their travel story (apparently the story of their lives), and thereby sparked other people's dreams, but also really live their dream to the fullest including raising their children while overlanding, which seems to be an exclusion criterion for so many people. 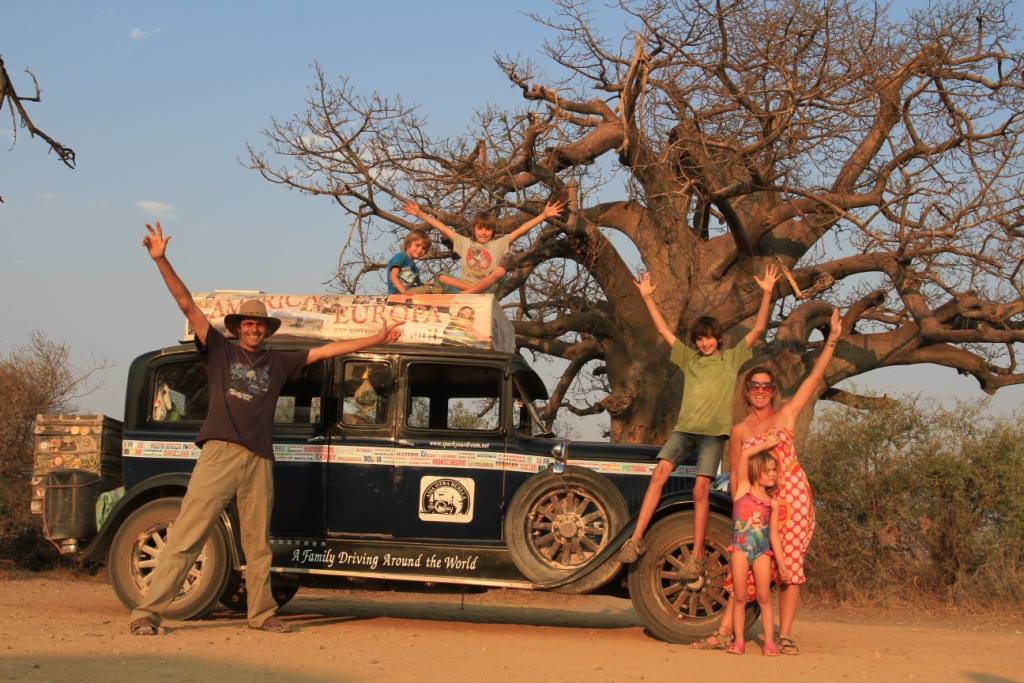 "Spark your Dream" is a spiritual, inspiring and honest book written by a really courageous couple. All the time, the book never is lecturing or boastful, but rather "down to Earth" and winsome. The book is an absolute "must-read" for any traveller, overlander and nomad ... and it may "Spark your Dream" as well and soon, you may discover yourself on the road!

"Take heart, we're like ships, from the time we're born we are built and prepared for the high seas, we are constructed so we can face strong winds and storms. We have been taught that there is an enormous world made up of seven seas and seven continents. An it is before we are ready that we want to go out, when we're still small and not prepared. By the time we are ready to set sail, when our hull and our sails are stronger than ever is when we don't lift the anchor ... We feel that we're missing something, that still we're not ready, because there will be storms, because there will be ... We are ships, in the port we are safe, but we're not built for this." (p. 202)

... At the end, I feel a bit lost having finished this great book, because I don't want to leave Herman, Candelaria and Pampa; somehow I really miss them ... maybe they're just around the next corner, running into me by chance, destiny, ... ?! Or maybe it's going to be you! 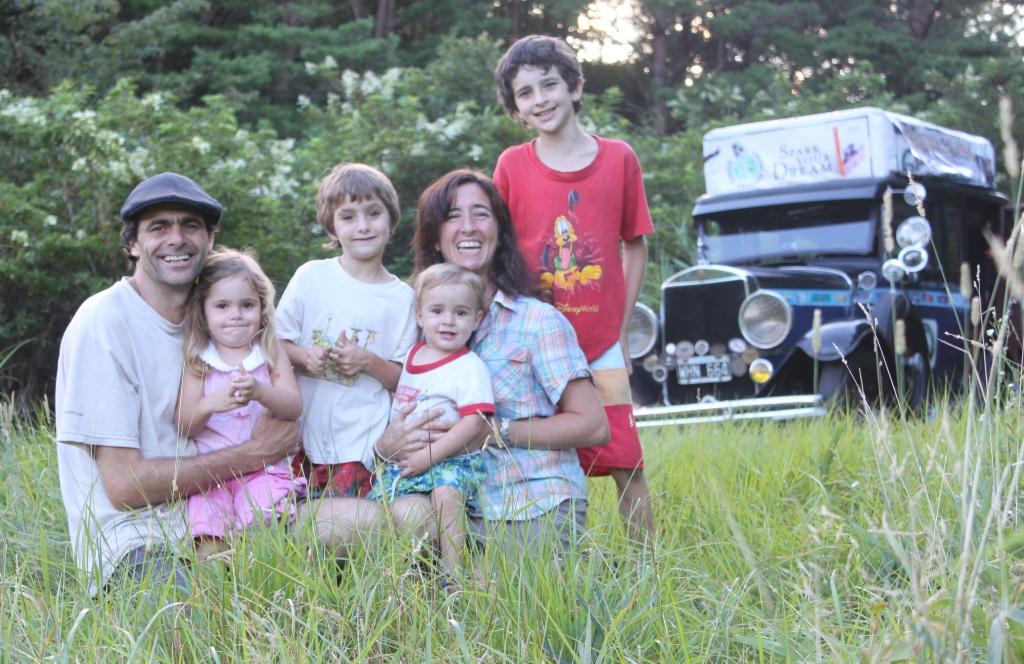 All images used in this post are the property of Herman and Candelaria Zapp.