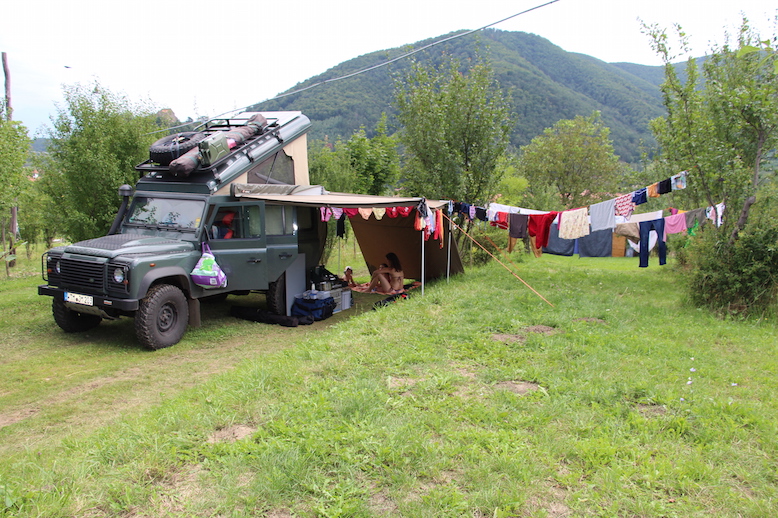 After leaving the wonderful campsite "Ons Dorpke" in Kiskunmaja, we slowly travelled westward along Hungarian backroads (sometimes just earth roads). We actually wanted to find a small campsite or place to wildcamp near the Danube river, but due to the immense rainfalls during the weeks before, the Danube ("Duna" in Hungarian) had flooded every single spot! So, on we went ... As we found no nice place to camp, we had to go as far as Siófok at the lake Balaton. That certainly was a culture shock! We simply had been too long in the bush to be able to cope with the touristy atmosphere around the lake.

We left the next morning and went on to Austria. On our way, we visited the Archabbey of Pannonhalma, a World Heritage Site, which unfortunately was not the expected "princess' castle" we promised Anouk but still was impressive.

Suddenly, we were back in western Europe ... This we not only recognized because of the increasing road conditions! Again, it was hard to find some place to stay, especially, as the area south of Graz is quite populated. On a lonely road through the mountains, we suddenly discovered a signpost showing that an inn would be only a few km away from the main road. We gave it a try and it turned out to be just the perfect spot: a young family runs an eco-farm there and they also own a small hotel and restaurant. The place is called "BIO-Hotel - Alpengasthof Koralpenblick". We could camp behind the barn and later had a most wonderful dinner at the restaurant (and breakfast the following morning). This place really is worth visiting! All the food, even the wine and spirits they serve, comes from their own farm or eco-farms nearby or is collected in the wilderness. The whole complex of farm, hotel and restaurant is energy-autarkic. We were the first to camp on their premises, but we still are going to include them into our "camping and accomodation" section. We'll most certainly come back some day!

The next morning we went on through the Alps to the small village of Altenmarkt im Pongau, where we relaxed for another two days on a wonderfully equipped campsite. As the weather was expected to be rainy for the next following days, we went on to meet friends, Karin and Wolfgang, in a small village near the Austrian-German border. Karin is the chairwoman of the small German/Ethiopian NGO "Adigrat Vision e.V." who set up and run a small kindergarden in the northern Ethiopian city of Adigrat. We sat together, enjoying good pasta, wine and conversation and planned how we could intensify our collaboration, as we support this nonprofit association.

As the weather would be rainy and thunderstormy during the complete following week, the decision concerning the route for the next following days was clear: back home with a short stopover at Mischa's 94-year-old grandmother. So, now we're back in Germany with the travel bug still in us missing all the nice people over in Eastern Europe. We definitely will come back! 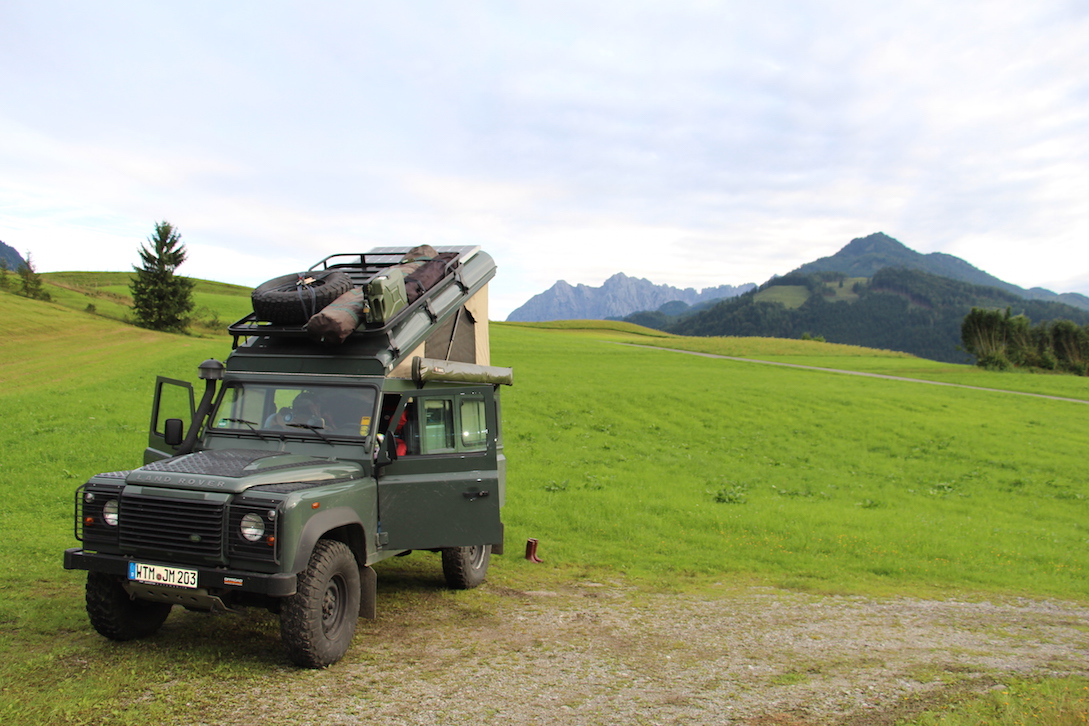 Visiting friends near the Austrian-German border 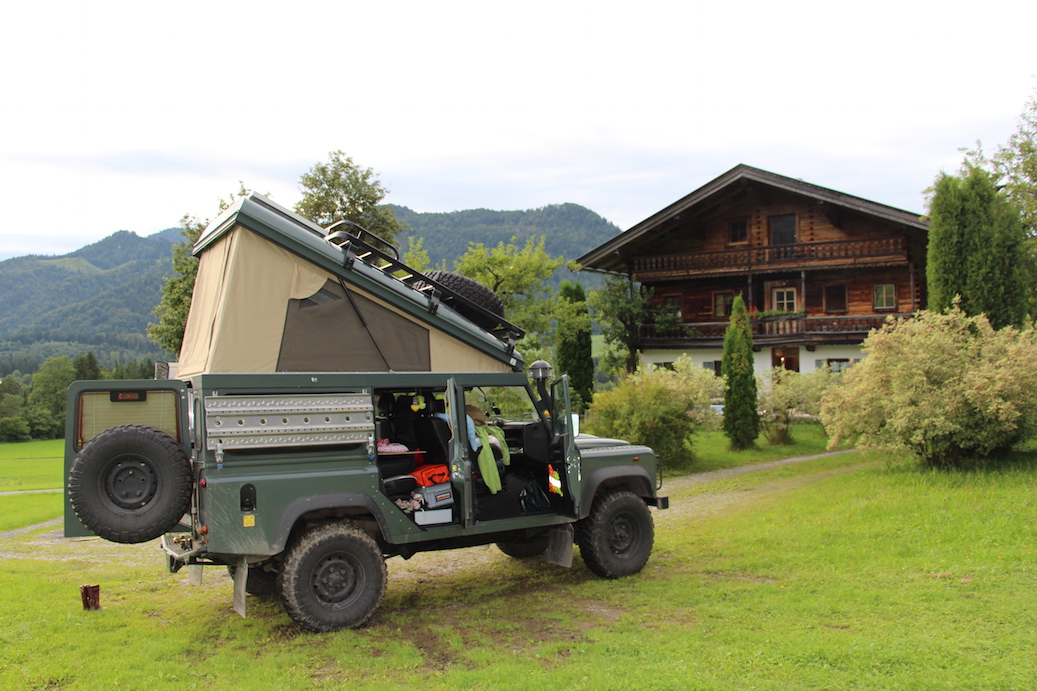 We love to talk and dream while driving ... When travelling back to western Europe, we philospohied about our way of travelling, children, family life and our gap year / sabbatical which will start in less than one year. We looked back onto the days when we told the first few people about our plans. Strangely, apart from some really close friends, a lot of them just said "how interesting" in that funny kind of tone that actually is wanting to express something else, namely "Strange idea!" or "Have they become nuts?" Others openly stated that this kind of travel is unhealthy or dangerous for young children and thus irresponsible and only egoistically following the adults' plans.

Looking back on this trip and on the other two overland trips we did with our kids actually only encouraged us in following our dreams and going on travelling like this. Even though every trip of that kind certainly is a challenge for both kids and parents (cultural challenges, hours on end driving on really bad roads, setting up camp, packing and unpacking, parents constantly being there for their children), we feel a deep satisfaction that what we are doing is the right thing for us and the kids. Actually, we are counting the days until the "big trip" next year!

The strange thing also is that as soon as we are on the road, the kids behave differently than they do at home. It is as if they throw away the chains "normal" life puts on them and start to be how they want to be. They lose shyness, they relax, they intensively enjoy themselves, they roam around freely and enjoy encounters with a lot of children they can't even communicate with on a common language-base! They want to help and work together with us when we cook, do the washing up, make fire, set up camp et cetera. We feel that they simply grow so much in character with every travel we make! 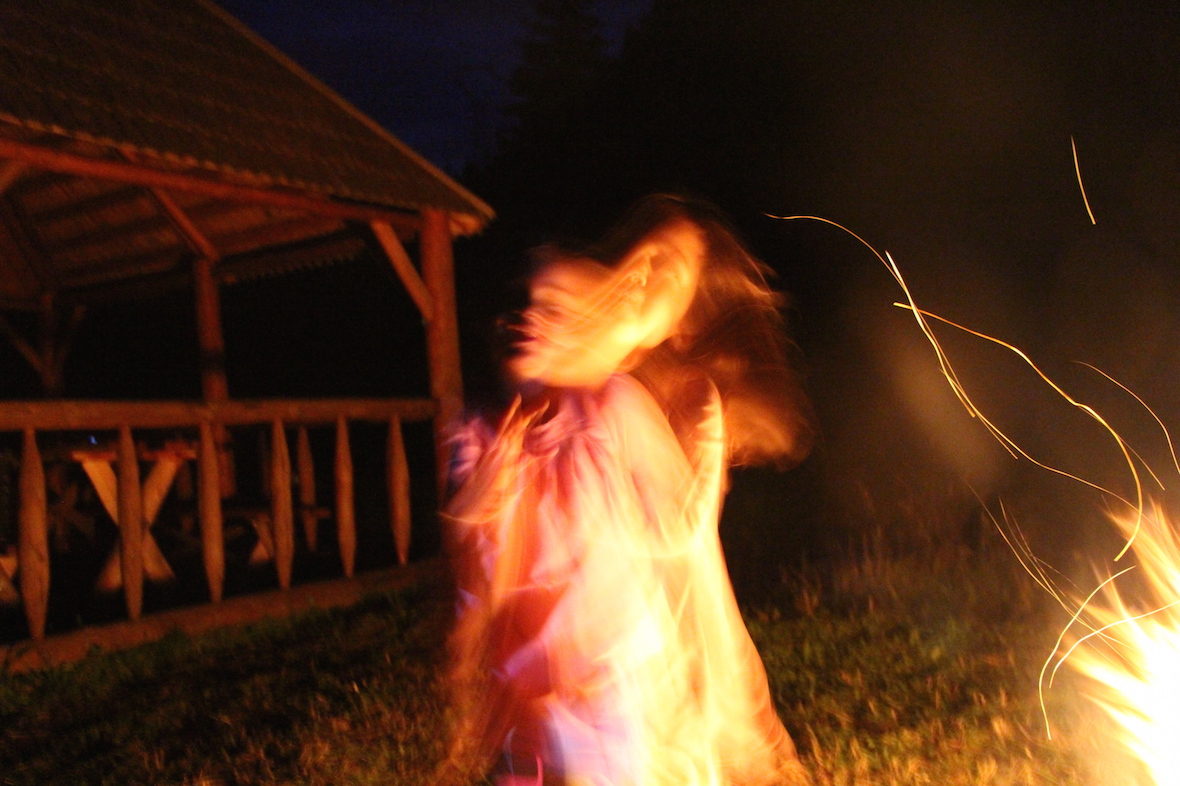 Anouk devilishly dancing around the campfire one evening 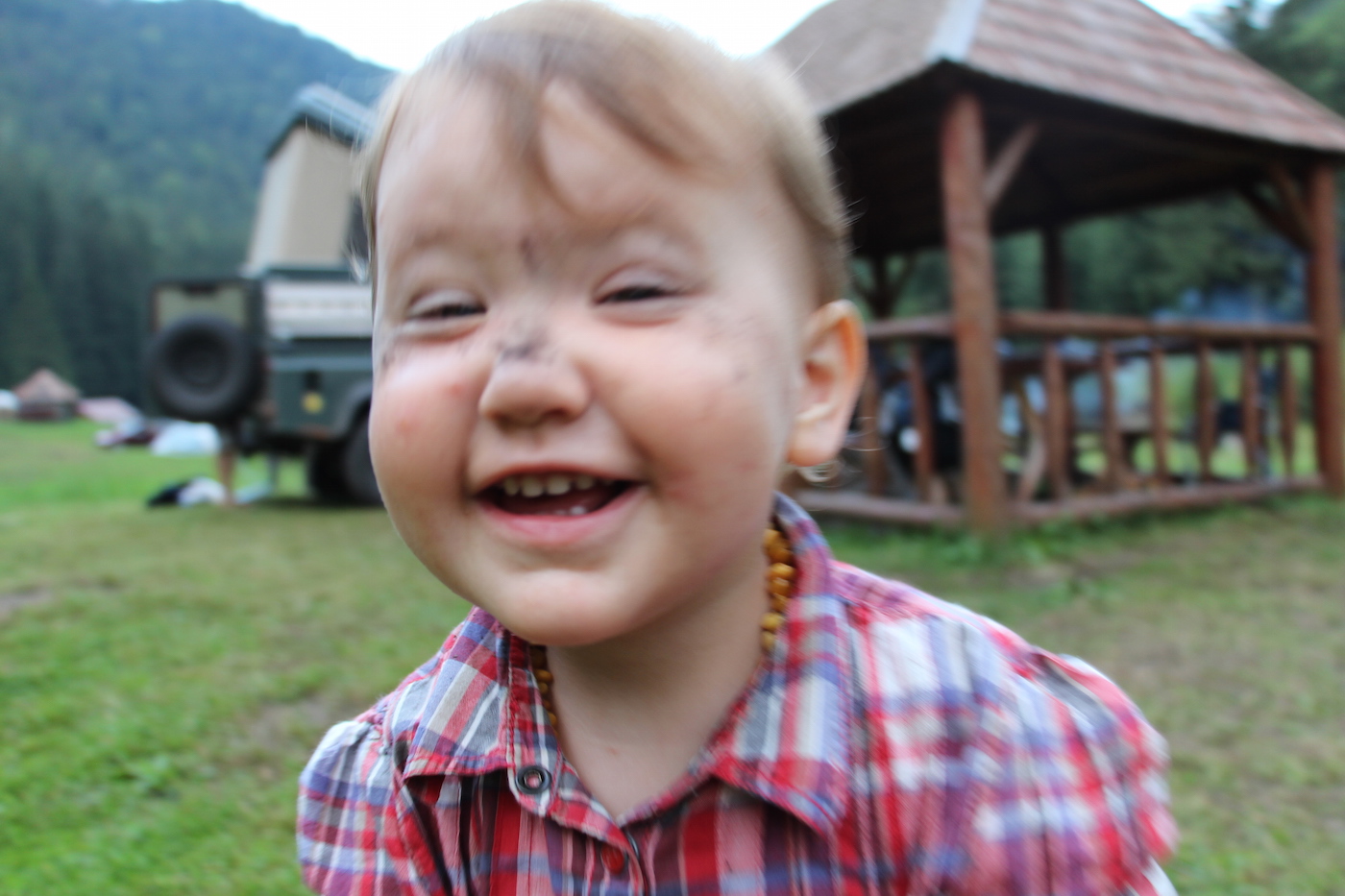 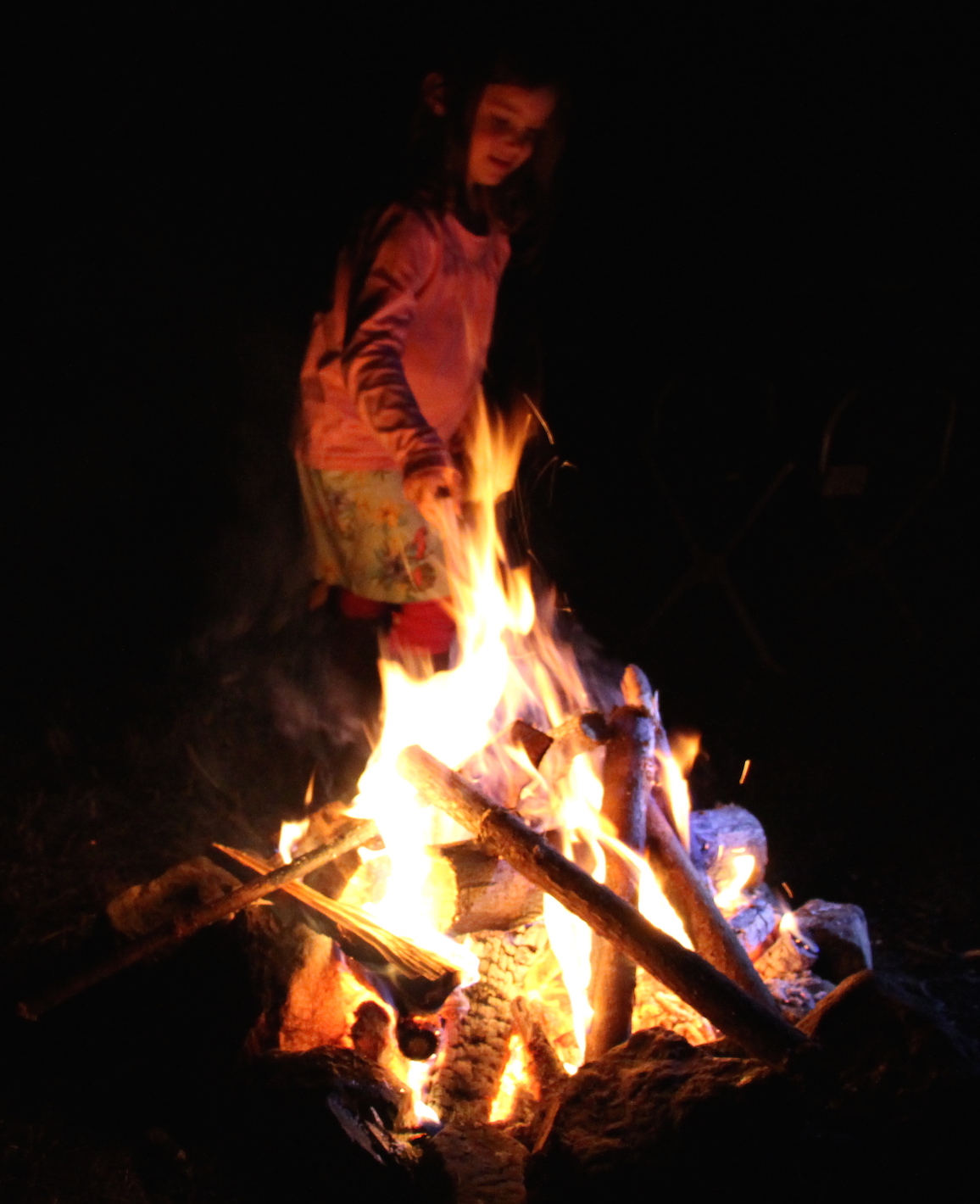 Anouk at the campfire 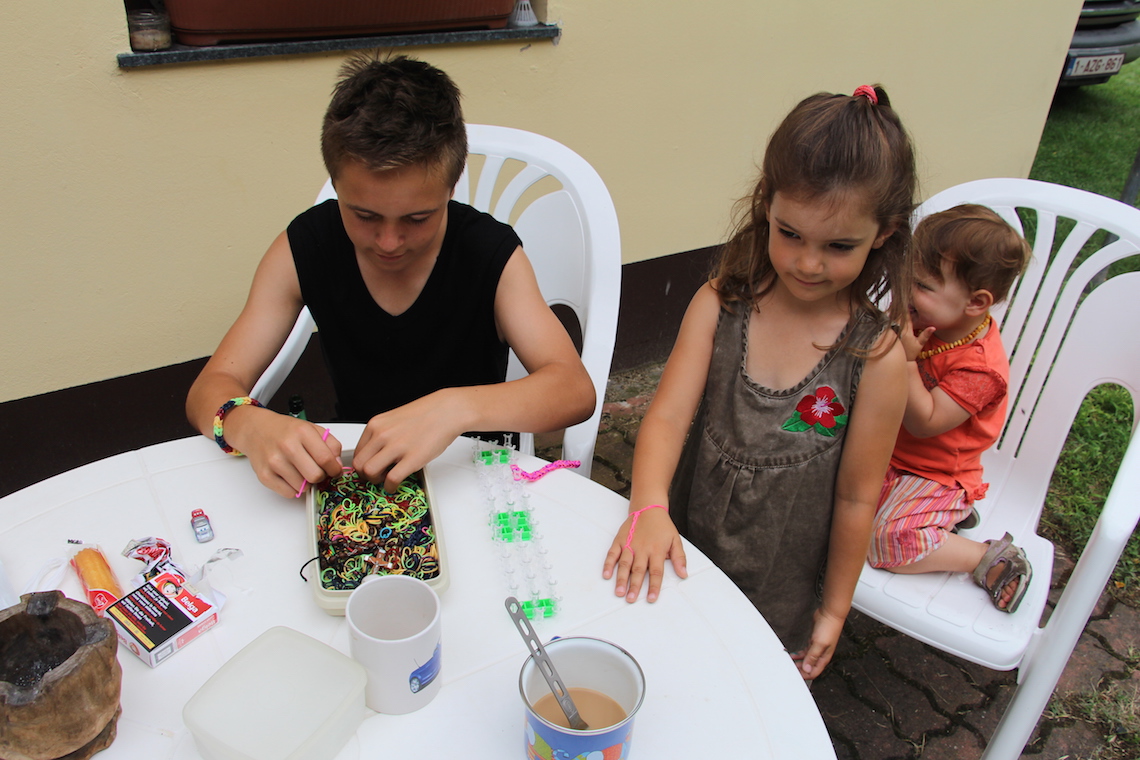 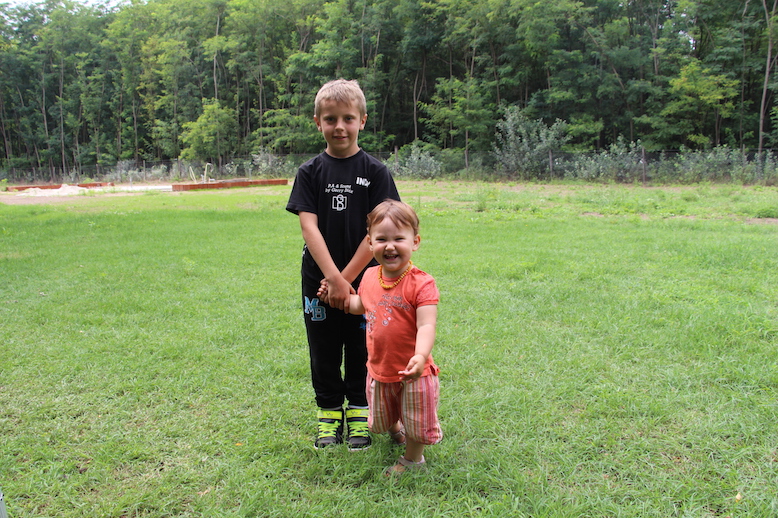 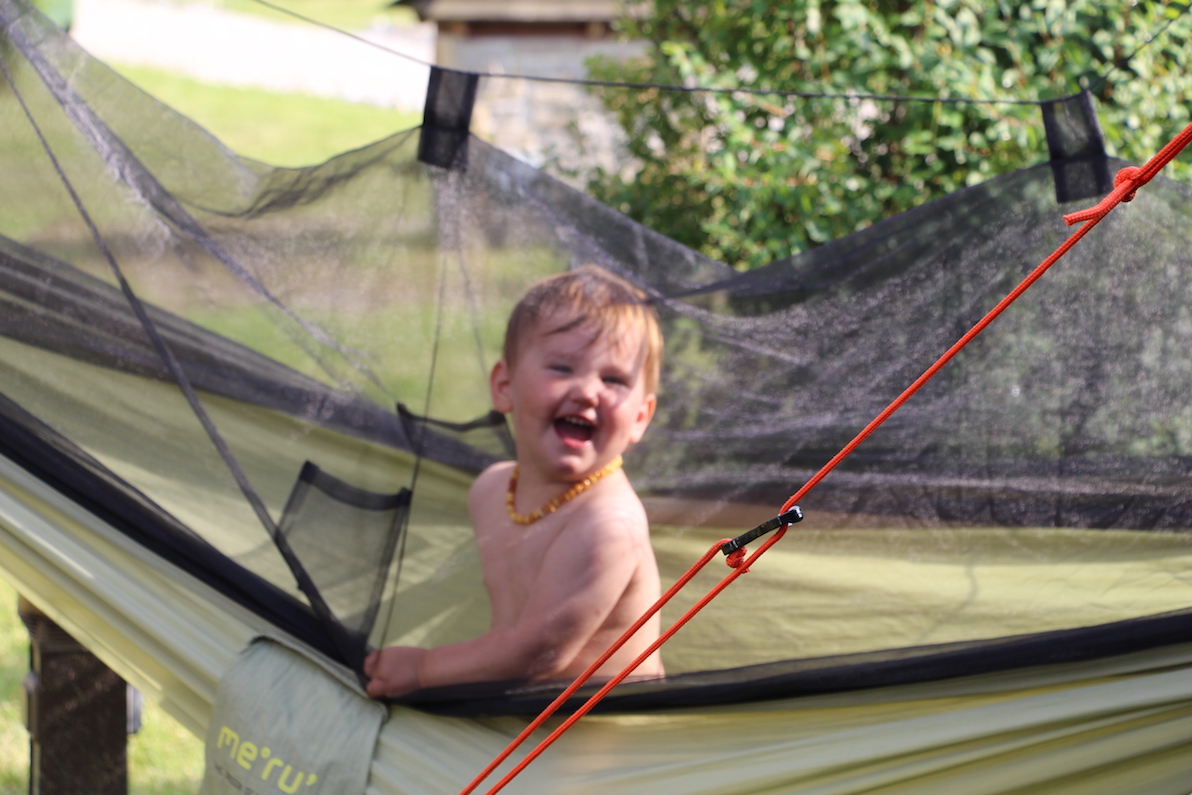 Some people seem to think that it is irresponsible, to travel to eastern Europe or Africa with children of such a young age. We definitely have a completely different opinion on that! It is funny that especially people who tell everybody that a "big conspiracy" is going on and that we should not believe in what governments, scientists and the media tell us about whatsoever, believe in what the media tell us about the "dangerous" life in Africa or eastern Europe or the rest of the world outside Europe! We feel that "cultivating" fear makes people only help accept their lives and helps them put aside their dreams into the "impossible to reach-drawer". The world outside is not as dangerous and unfriendly as the media want to make us think! Instead, people will embrace you with openness, interest, helpfulness and friendship!

One could also ask all the people spending their holidays in R******* Clubs with their children, "Why do you work 24/7 and then go to a club of that kind just to give your children away to be taken care of by somebody else so that you, the children's parents, can relax and have your freedom?" Speaking of responsibility and egoism ... where are we here?? (Also, do you know that most of the money spent there does not go to the people in the country but back to TUI in Germany?) Children need parents and our way of travelling makes us be together 24/7 on a very small space, susceptible to wind and weather ... children can't get more from their parents, actually! And children will get to know their parents really intensively and will endure and enjoy all kinds of different situations together with them. And they will learn so much through travelling! That's why we invest (at least) one year of time, money, retirement pay shares etc. in our family-life!

During the last eight years travelling in central America, Australia and Europe, "on the road" we met with carpenters, plumbers, university professors, teachers, doctors, software-producers, writers, old people, retired people, young people, people with or without children, people with handicaps, ... in all kinds of cars and vehicles ... and they all were able to fulfill their dreams of long overland travel! It is possible! You just have to stop thinking why it can't possibly work and start planning! And children simply love travelling and open up doors wherever their parents travel with them!

Please, don't get us wrong here: we don't want to judge others who don't travel like we do ... reciprocal acceptance without the use of thought-terminating clichés would be nice, though! Let's be tolerant and open for different ways of life!

Summing up, we strongly recommend overland travel to you, especially to parents with young kids! Don't let others stop you dreaming and making dreams become reality. 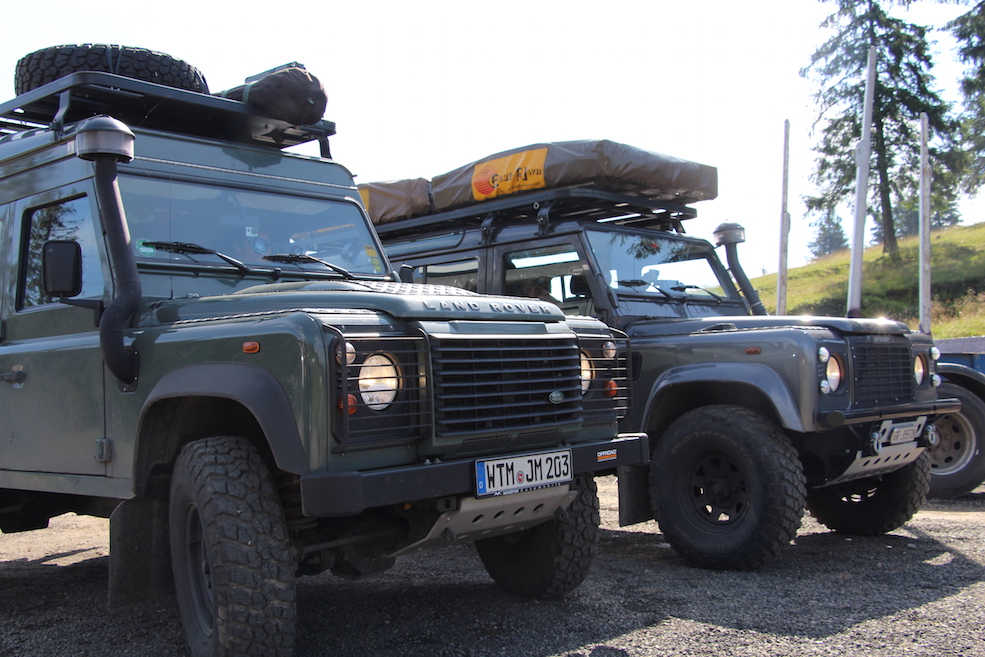 We end this long and philosophical post with a comment by fellow nomads Candelaria and Herman Zapp who have been overlanding with their four kids for the last fourteen (!) years:

If we only do what is normal for others, we'll all end up doing the same, sitting around in silence, wearing the same, in a world without smiles or songs. If only those who know how to do things can do them, no one would do anything, because everyone at some time would have to learn. Don't miss the moment, laugh much, if it's big belly laugh all the better, be a child, without restricting your laughter, spontaneous, fresh. Don't tie yourself to your environment, forget your prejudice, laugh, dance, sing, and you will feel how fabulous it is to be a child once again. 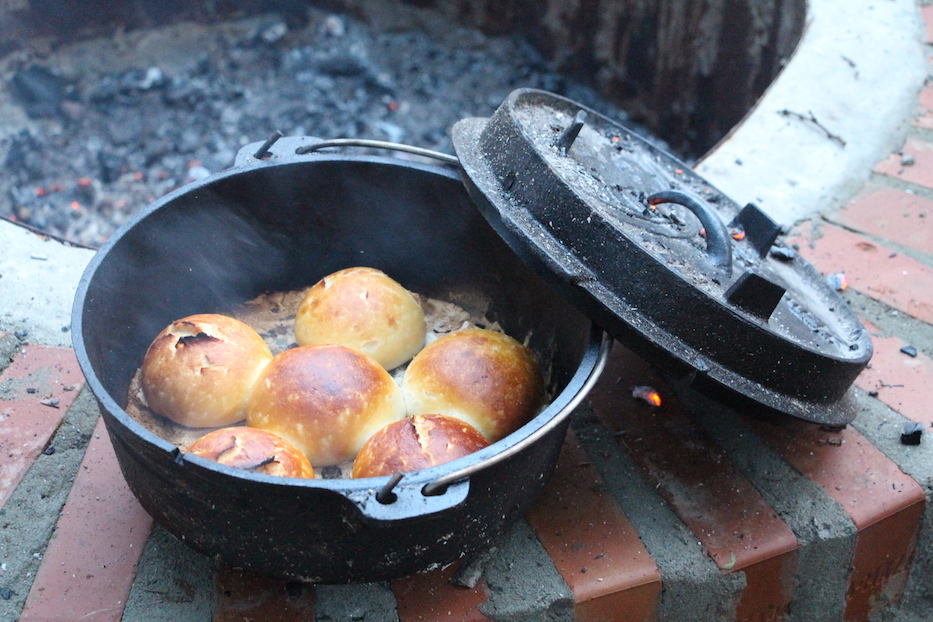 This time, we are posting two recipies "from the road" ... Food, for us, certainly is an important part of the travel experience and we love to experiment with local spices, ingredients and recipes.

At the campsite "Ons Dorpke" in Kiskunmajsa in Hungary, actually the most familistic campsite we have experienced so far, we sat around the campfire with the Belgian baker Marc and his wife Ilona whose parents originally came from Hungary. In planning dinner for the next following evening, we decided to cook together and combine Lecsó, a typically Hungarian recipe, with fresh rolls baked in our Dutch Oven (we have a Petromax Feuertopf). The following two recipies were tested on that evening and proved to be a really tasty, simple and cheap meal that can easily be cooked over the campfire / in the campfire ... and wonderfully goes along with a bottle of good Hungarian red wine.

Mix the dry yeast with a glass of warm water and put aside. Mix about one third of the flour with water (if you want to add oil, it's the right time now) and knead it. Then add the yeast and work it in thoroughly. Knead the dough until it has an evenconsistency. Add more flour and more water. In between you add about 3 tablespoons of salt (don't do it before, as it will harm the yeast's activity!) ... At the end of the kneading process, the dough should have the consistency of well-chewed chewing gum (but it should not stick to fingers or the bowl you knead it in! ... if it does, the dough does not have the right consistency!). Let the dough rise for at least half an hour (it's better to give it some more time!).

Preheat the Dutch Oven in the fire for about five minutes (closed).

Form small rolls (they should fit into your cupped hands) and put six to eight of them into the Dutch Oven. Dab the top of the rolls with water to give them a brown crust later. Give them enough space to rise.

Put the Dutch Oven next to the fire for another ten to twenty minutes, first one side and then turn around the Dutch Oven after about five/ten minutes.

After about 15 minutes in the fire, the rolls are ready. 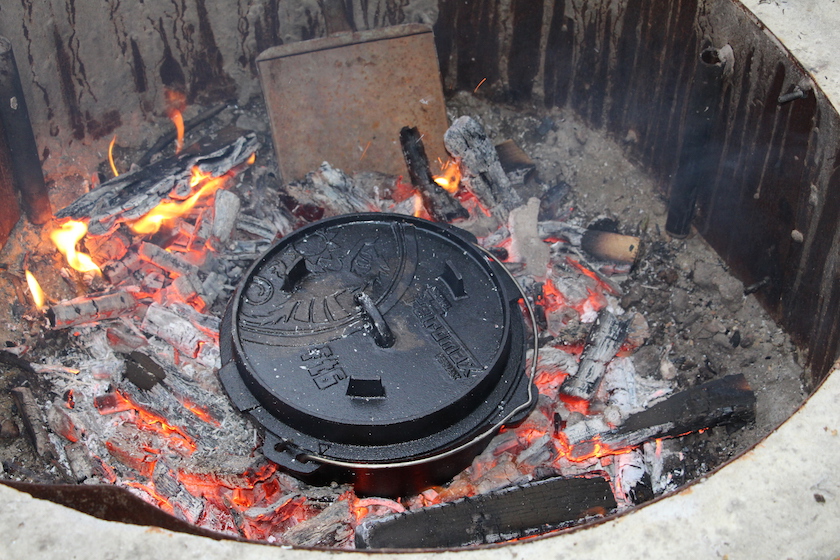 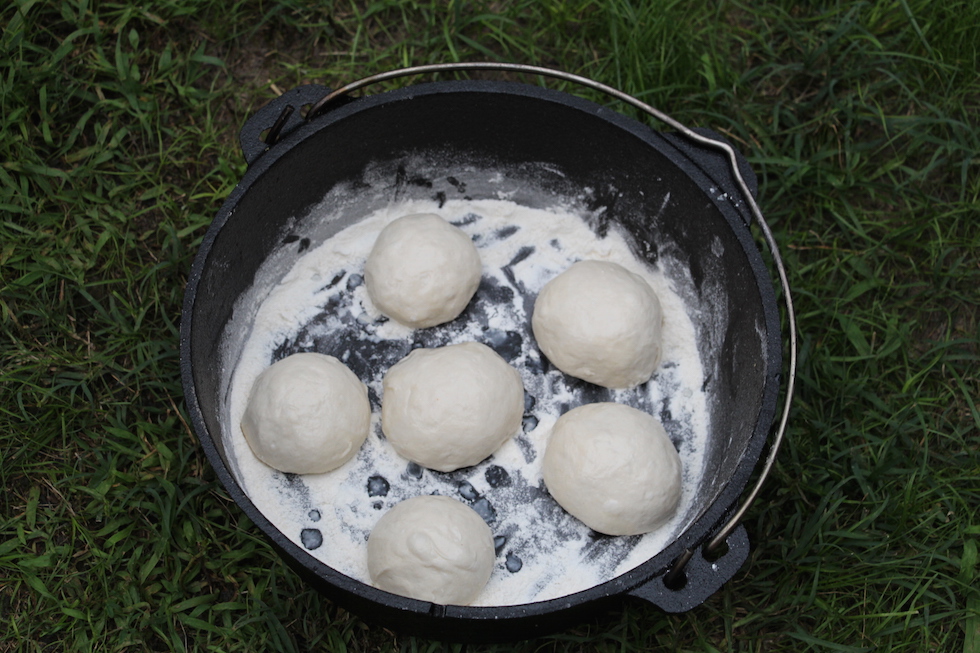 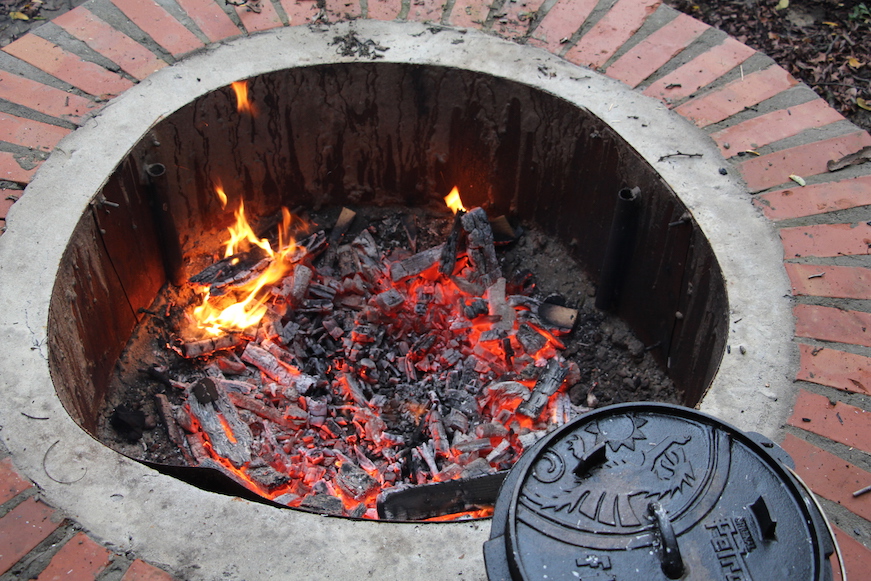 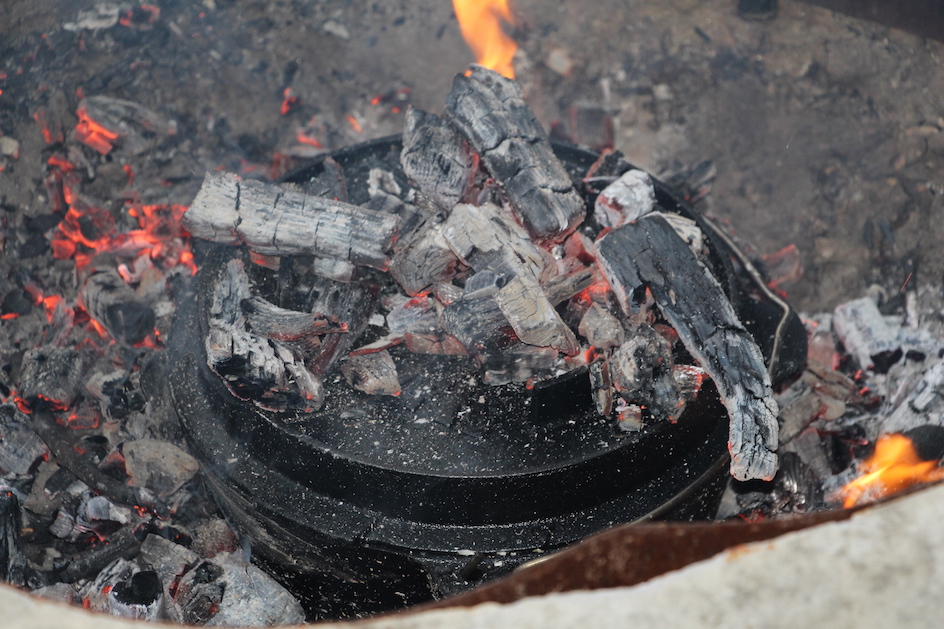 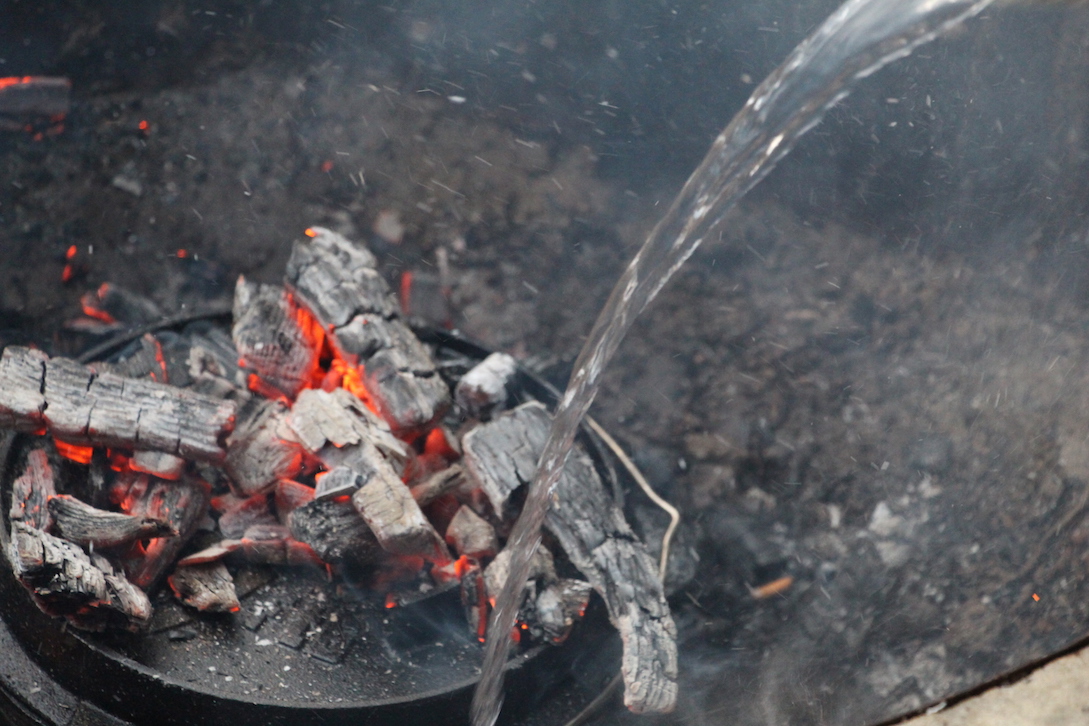 Fry the onions in the sunflower oil until they are brown and then add the bell pepper. Let it fry for some time and stir from time to time. When the bell pepper starts to get brown add the tomatoes and let the vegetables simmer for some minutes. Add tomatoe paste, some water, salt, pepper and bell pepper powder and then the sliced Hungarian Salami. Let the Leczo simmer for about half an hour with the lid open until it's ready to be served. 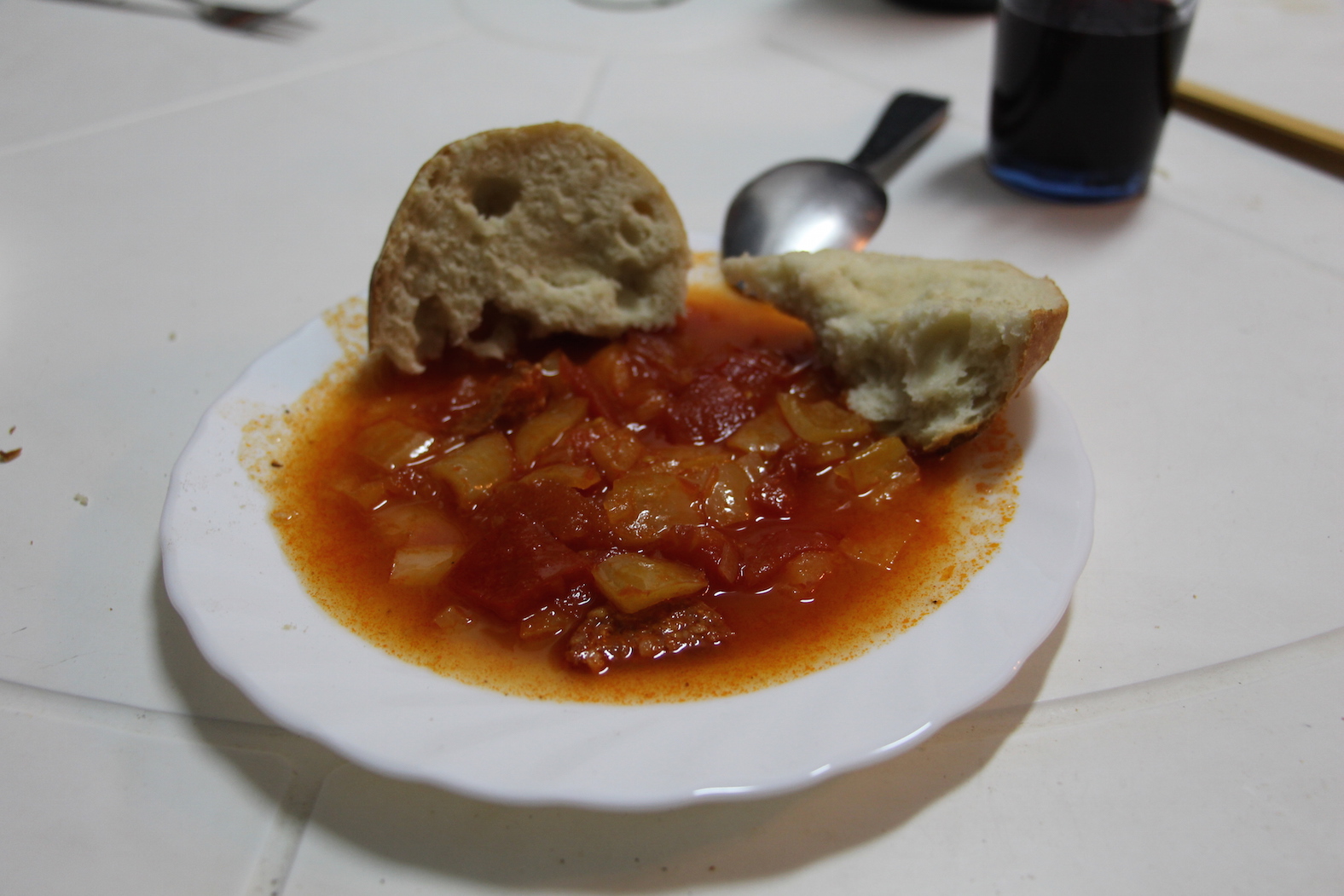