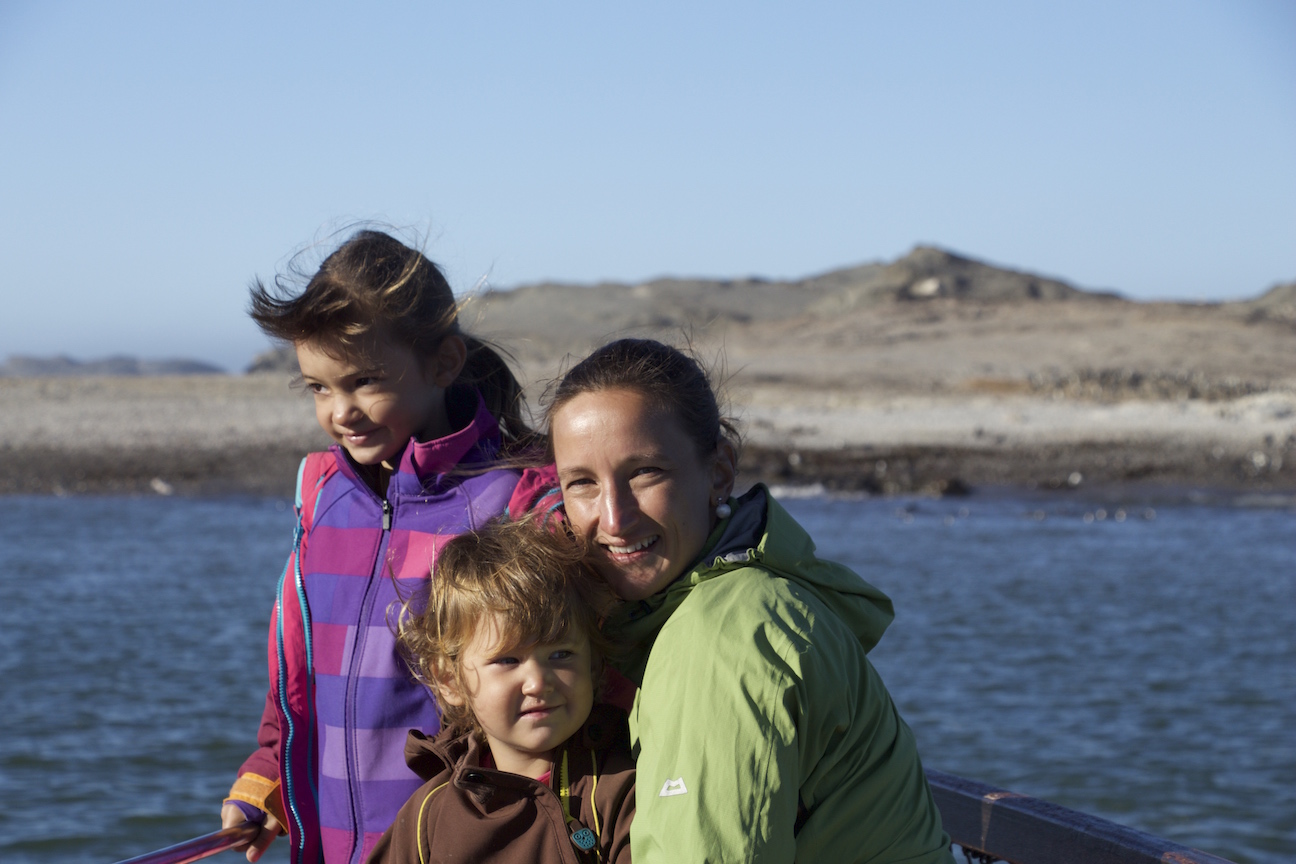 Dreaming into the sea in Lüderitz in Namibia indulging in old seafaring memories, we met the former diamond diver Heiko who sailed around the world for eleven years together with his family. Our old dreams of sailing and circumnavigating the world resurfaced and we yarned, informed ourselves and sketched sailing boats which we thought might be ideal for worldwide voyages for a traveling family ... traditional boats, spacious, convenient and ocean-going ... just like a "Colin Archer" maybe. But it would also have to be suitable for more or less single-handed sailing! A new dream, a new project called "Ocean Gypsies" came into existence! 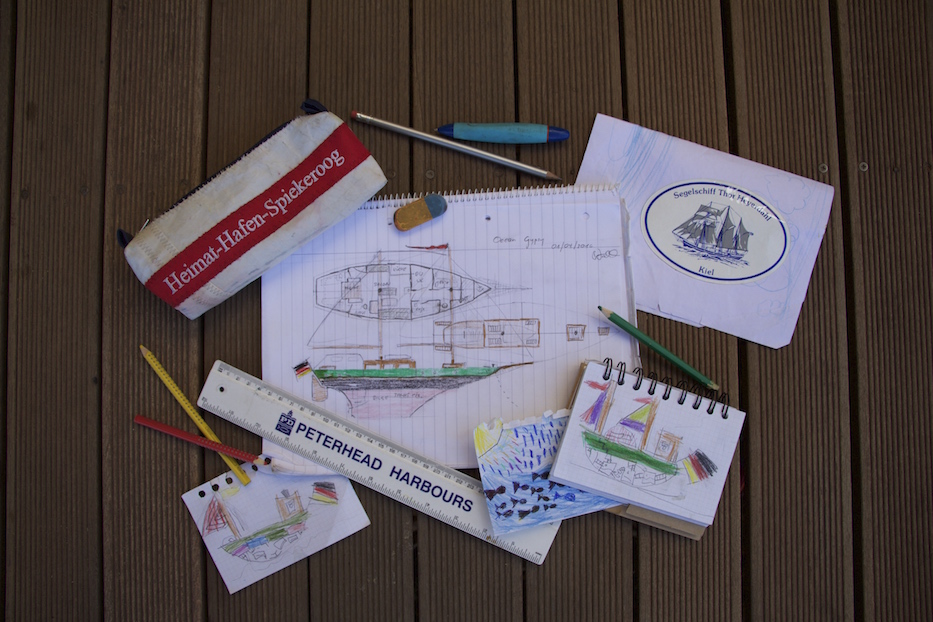 The next similar touching view of the ocean we indulge in is at "Cape Agulhas", the southernmost tip of Africa (here is the blog entry on this wonderful place).

... And promptly but by chance we meet Malan Conradie, a local boat builder, at "Cape Agulhas Backpackers". He and his wife Erin own the "Backpackers". 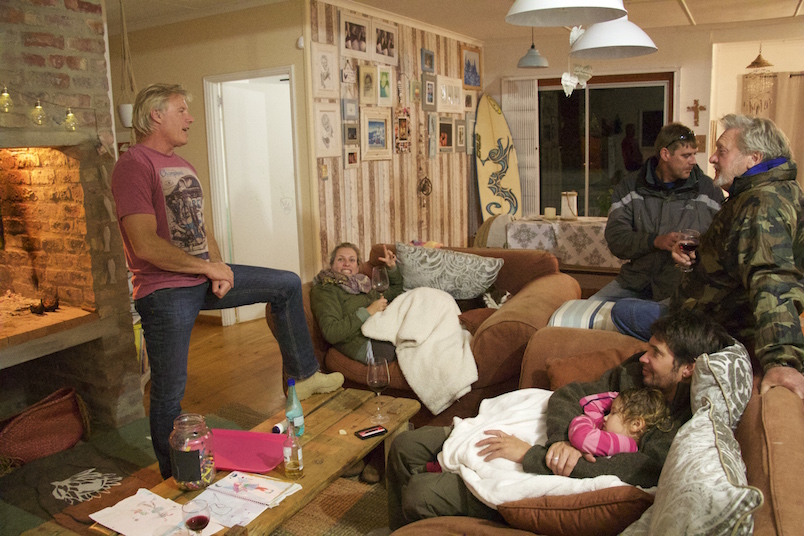 Malan is a great inspiration for our "romantic-sailing thought-cloud-castle" which during a long and gregarious evening he converts into a "sporty-sailing dream-beachhouse". He invites us to visit him in the manufacture of "Scapeyachts", a boat-builder's yard who build catamarans near Cape Town. According to him these guys have exactly what we need!

After two and a half wonderful weeks in Cape Town we again "set sails" for "Cape Agulhas" and stopover in Somerset West, where "Scapeyachts" construct and produce their catamarans.

Because Malan is rather an expert for highspeed "Hydrofoil" speedboats, his colleague and friend Kevin Knight, more specialized on sailing boats, shows us the catamarans in the factory hall and in the nearby harbour. 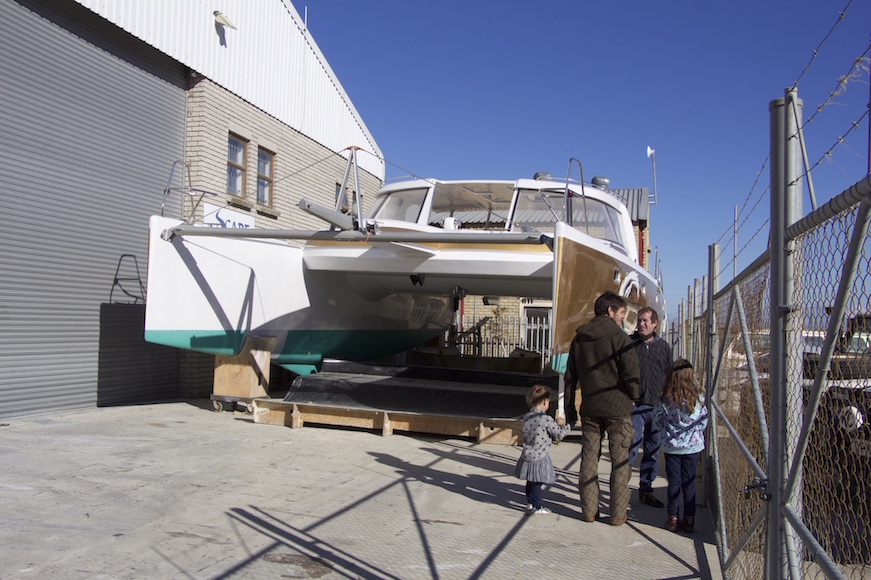 The catamaran looks quite big when out of the water! 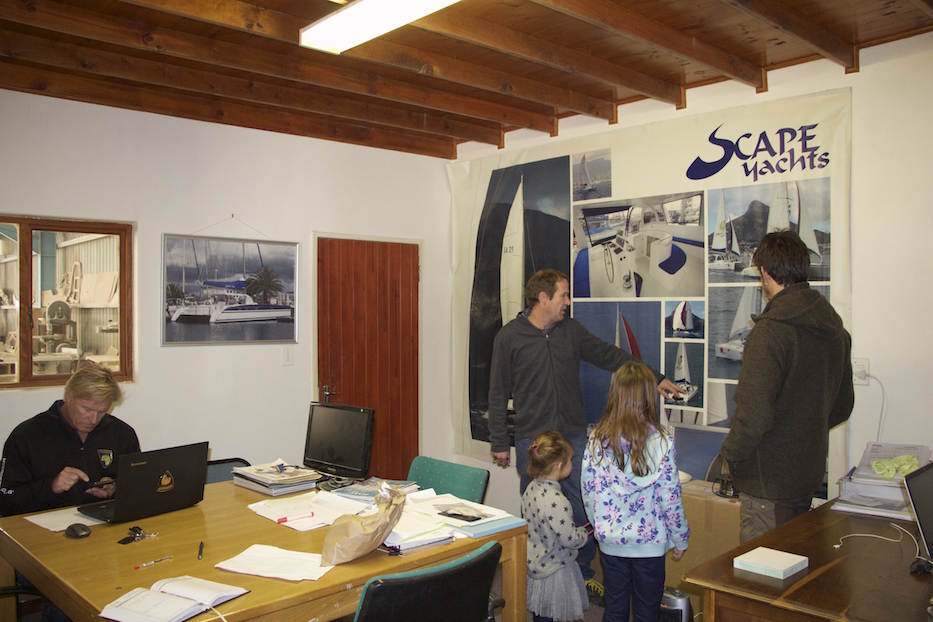 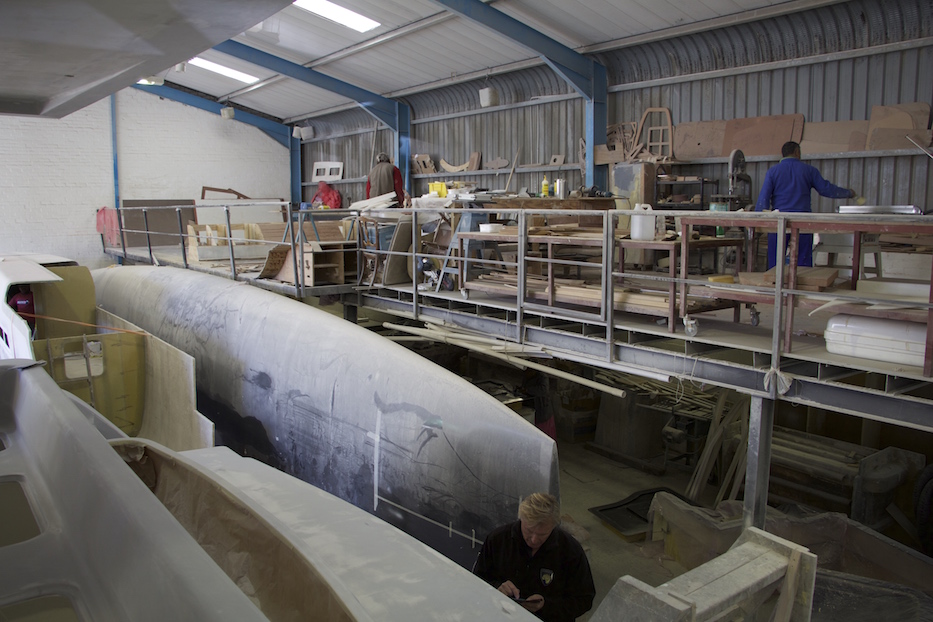 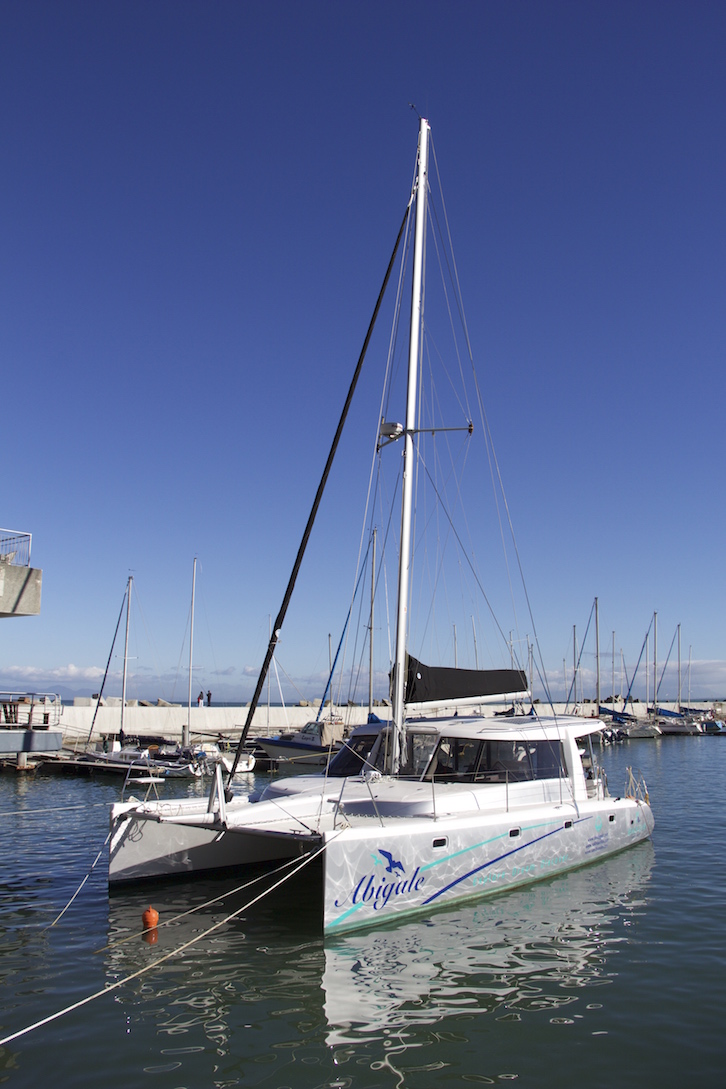 We actually arrived having many reservations, because we feel that catamarans in comparison to more traditional boats are rather ugly, far too modern and somehow unproportional (too wide and short). Simply "floating caravans". A seafaring romanticism which we know from the time we spent on traditional sailing boats and tallships, we rather can't imagine experiencing on such a "yoghurt pot".

But by and by, safety, convenience and sailing qualities indeed change our minds.

Because of its two hulls the catamaran is distinctly more stabile in the water, which makes everyday life on board considerably less demanding. Seasickness for example is not really a problem any more. The plastics of the hulls (vinylester resin and multi axial stitched E-glass fabrics, PVC/Nidacore sandwich vacuum bonded construction) has a multitude of tiny air pockets and because of that the hulls rise high above the waterline and thus bring about far less resistance movement than a monohull would, because that would most commonly float through the water on one complete side of the boat. Because of this difference, the cat can easily sail at speeds up to 27 knots (!). This is more than double the speed traditional sailing boats can reach.

"Quite dangerous!" one now could think! But the cat is more stabile, more rarely capsizes (if at all) and if by any chance one of the hulls should become leaky, due to the air pockets in the plastic material the boat is constructed of, everything will still continue to float even though the hull is full of water. Quite fascinating: just in case the boat hits a floating container, both bows break and take in the impact energy without the boat itself becoming disabled and adrift or in danger of sinking. Because both hulls have an engine, it would even be possible to self-salvage the boat into the next harbour. - Absolutely amazing!

The double "normal" speed thus allows worry-free fun and at the same time doubles the travel-radius, which bearing in mind the many dream-destinations we have in the backs of our heads leads to absolute excitement in us.

Another asset is the gregariousness that can be lived in everyday life on this boat. With two double cabins and two smaller "1,5" person-cabins in each hull and another two to four beds in the salon, we could invite many friends and family members to come sailing with us. 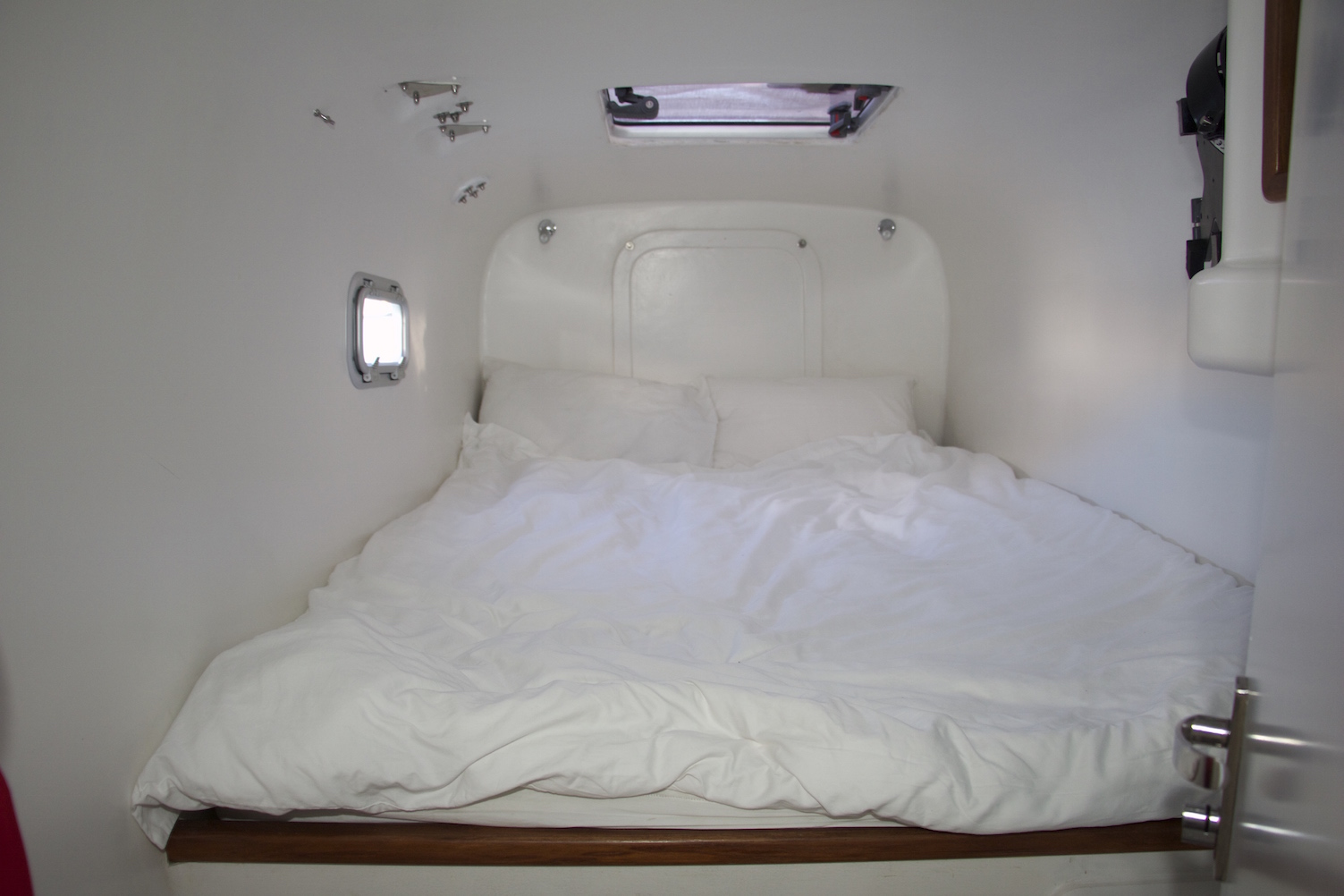 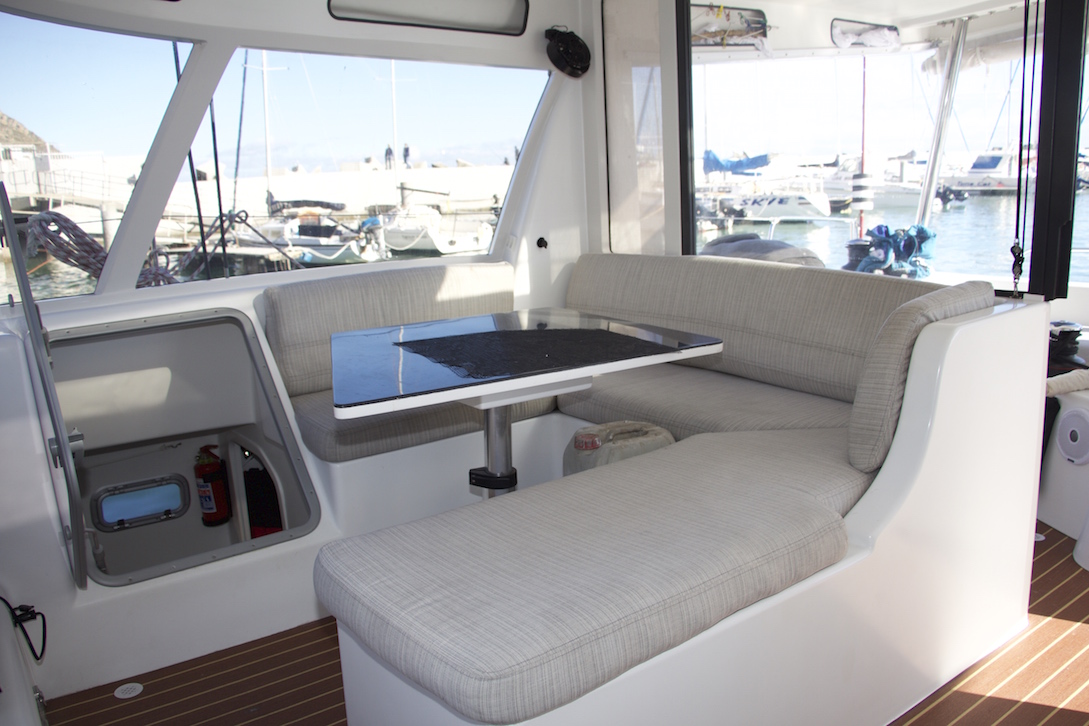 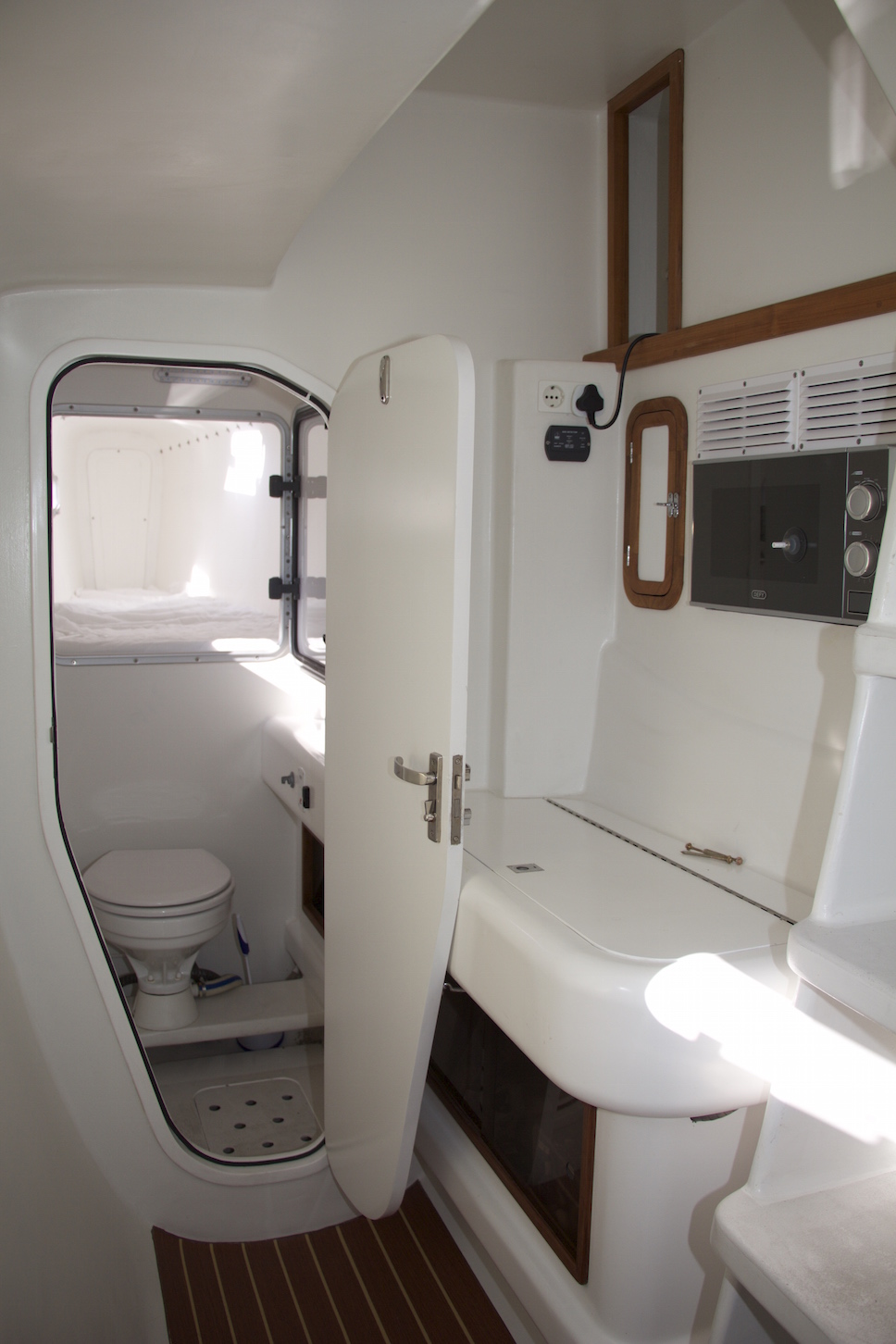 What also perfectly fits to us is the fact that one part of the salon, the centre of life on this boat with a mindblowing 360° panoramic view, consists of a perfectly equipped galley ... Absolutely great: sailing, chatting and cooking - everything side by side and together. 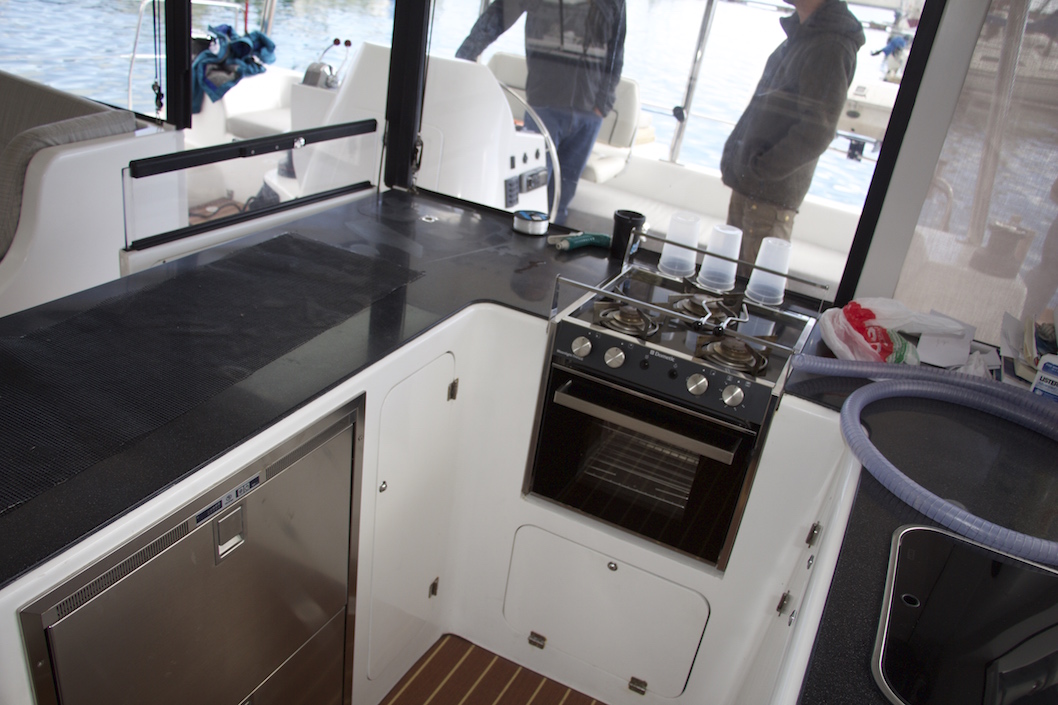 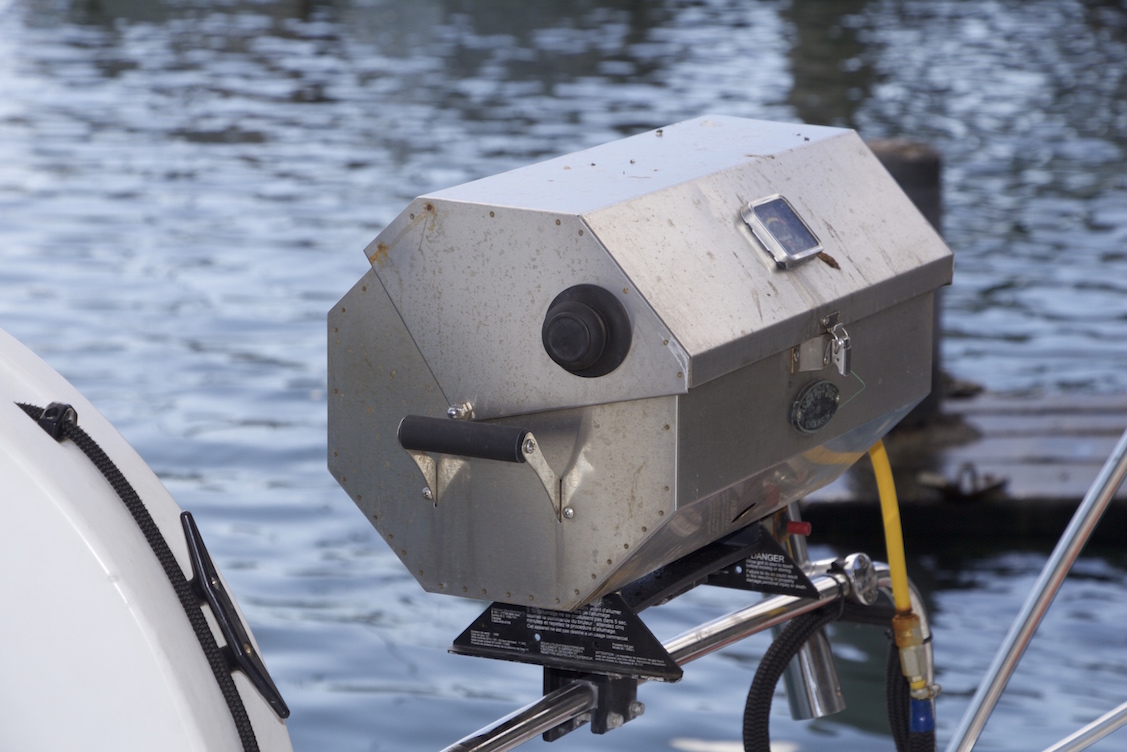 Can you imagine a boat being built in South Africa without a braai!?

And just in case anybody needs some time on their own, they can just retract to one of the four cabins in the two hulls.

Our two daughters of course like the two "trampolins" on the foreship the most ... and of course the diving platform and the two transom steps at the end of both hulls. Very family friendly and just made for long term travel! 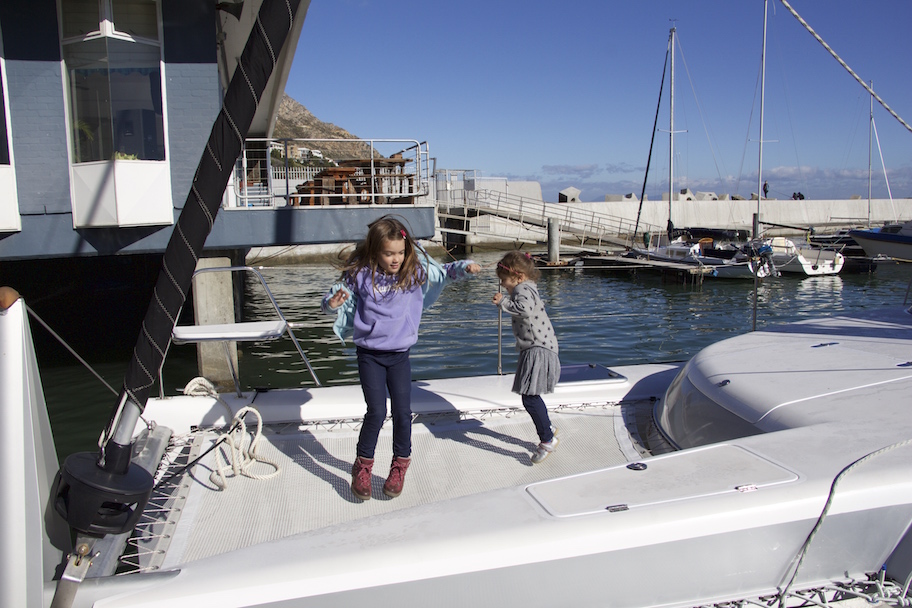 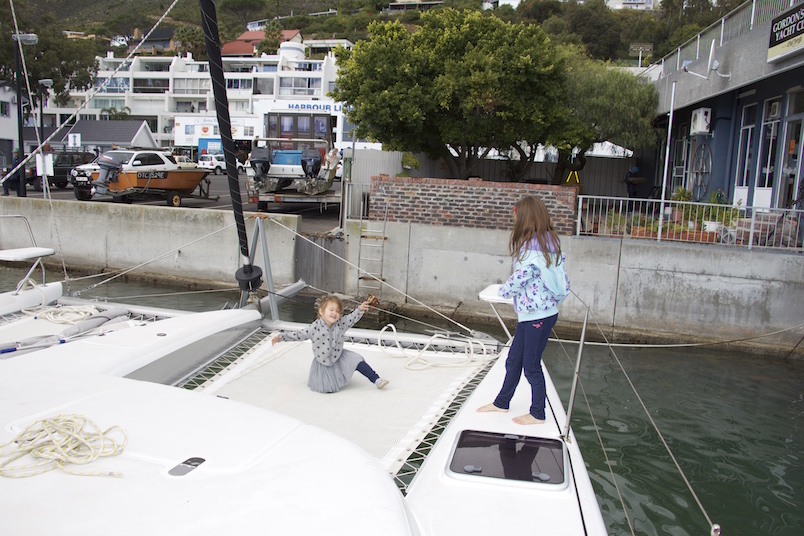 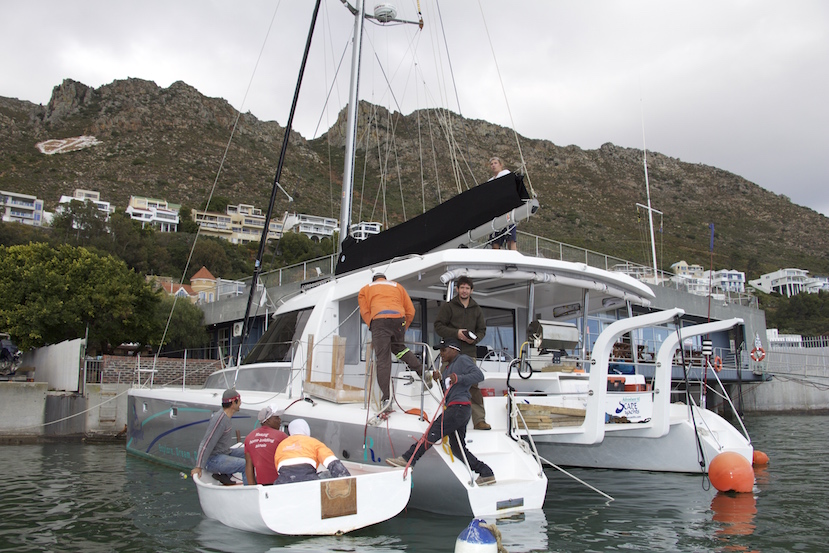 How impressively active and relaxing at the same time voyages on this boat could be, no matter if they are short or longer trips!

Due to the fact that the boat has a large fresh water tank of 400l, a water maker (reverse osmosis) plus the equipment to collect rain water, in addition to highly effective solar panels on the deckhouse, this boat is more or less self sufficient. Only Diesel for the two 29hp motors and gas for the braai, stove and oven has to be bunkered every now and then.

With this boat, we could reach remote places we would not even be able to reach with our beloved Land Rover "Nyati". 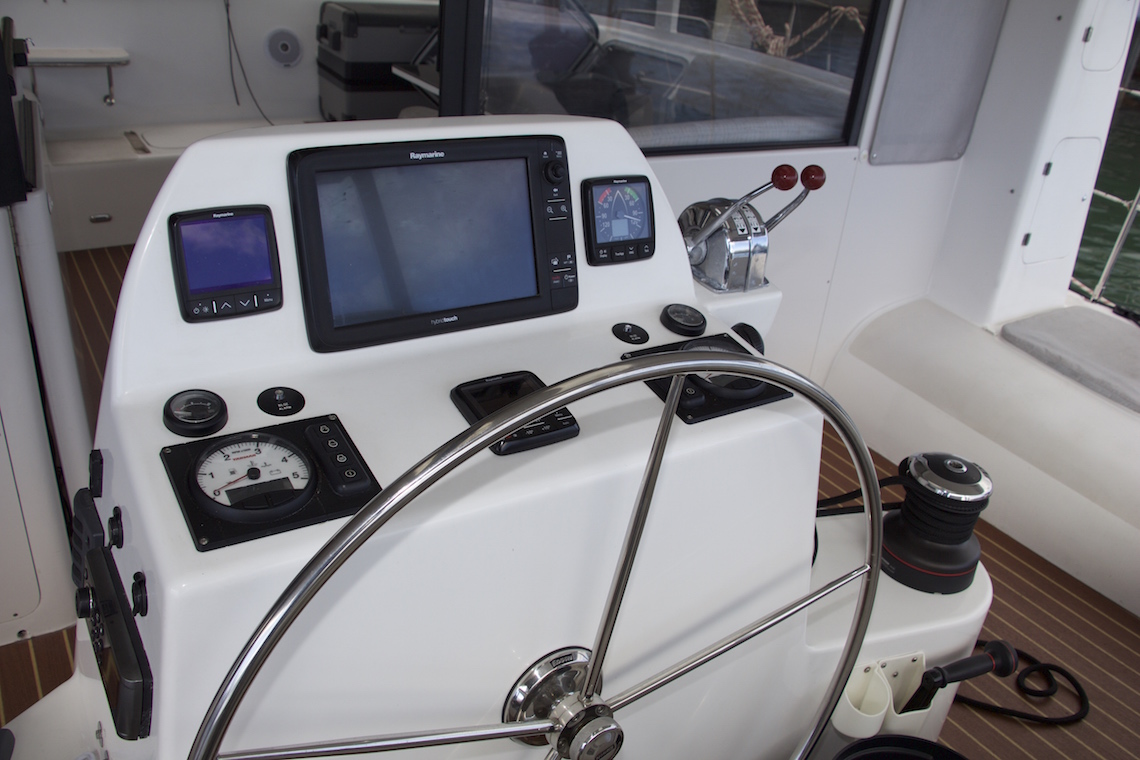 Sure, to be able to really feel comfortable on such a modern plastic-sailing boat, quite a few things would have to be designed differently, but real-wood veneer, metallic varnish and brass bits and pieces can easily add a "personal and comfy touch" to this boat.

So, only the price, which at the moment is rather inaffordable for us, is an obstacle in making our next dream come true.

But this also challenges us to make it possible, plan, work and save, because the quality of life one would get back with this boat would be worth all the exertions!