Why actually do so few people from the "western World" travel the world overland long term?

During a long "kitchen party" together with another German overland-family we discussed this question. 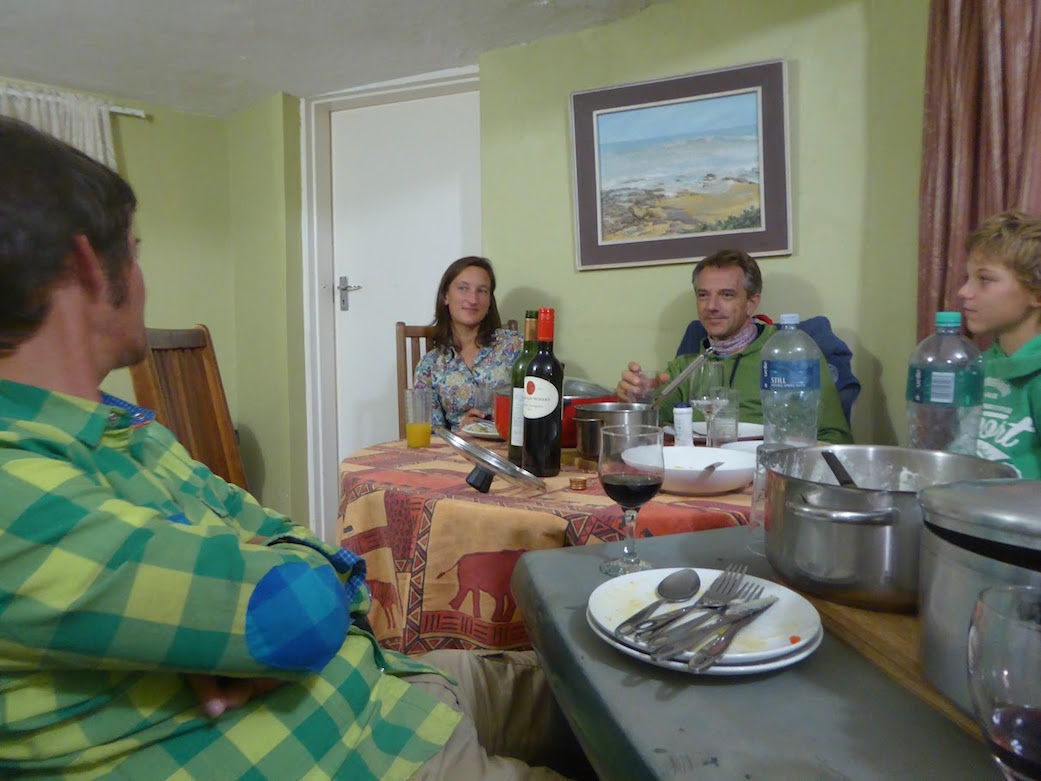 We love long kitchen parties ... not just before a long day of traveling!

Especially in industrial nations many people are extremely focused on consumerism and competition. Long term travel is nearly always connected to a long-term withdrawal from the competition with colleagues at work, which can even lead to a jobwise "powerloss". The jobwise position can most surely not be kept during a long term travel. Earning money in the "normal" way most of the times also doesn't work, so people can't consume the products advertisements make us believe we need as life-essentials.

Fearing these two aspects deeply combined with a general and all-embracing angst concerning the "dangerous world out there" is the basic reason why so many of the citizens of the so-called "Western World" do not go out to take a personal look at the rest of our globe.

But it is also the simple fear of "being singled out because of being different" that stops people from going on a long term travel, as everybody knows that every single bit of "differentness" from the "norms" can lead to social isolation - in spite of the fact that we base our governments, cultures, job-culture and circle of friends on democratic systems stating that everybody is appreciated, approved and recognized in their otherness.

By many members of the so-called "upper classes" and the "educated classes", for example, the overland traveller is being looked down upon from the safari-cars as being somewhat inferior and being some kind of "left-wing-progressive camper rucksack tourist" who is not able to afford "proper travel". 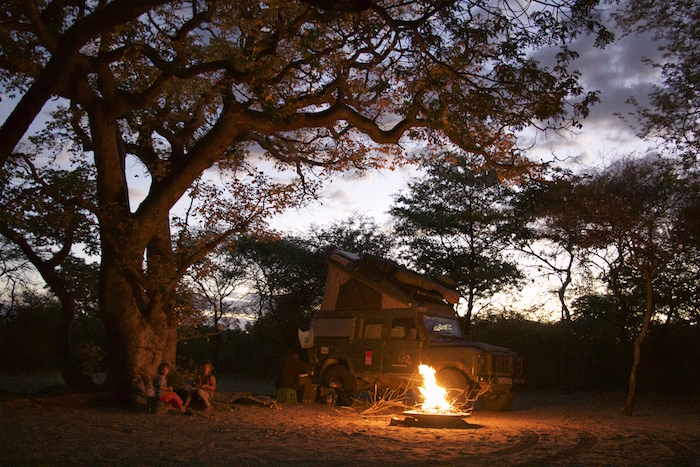 This is real luxury: a warm night, a blazing fire, good food and drink, nice company ... and all "homemade".

From the perspective of the so-called "lower classes" long term travelers are viewed as "posh tourists who can afford constant vacation" ... We have met members of all occupational groups on our travels: from bus driver to university professor and from nurse to medical doctor or teacher.

People who do long term travel have to accept that for the "system", they have now thoroughly become "strange" and even "suspicious" persons. 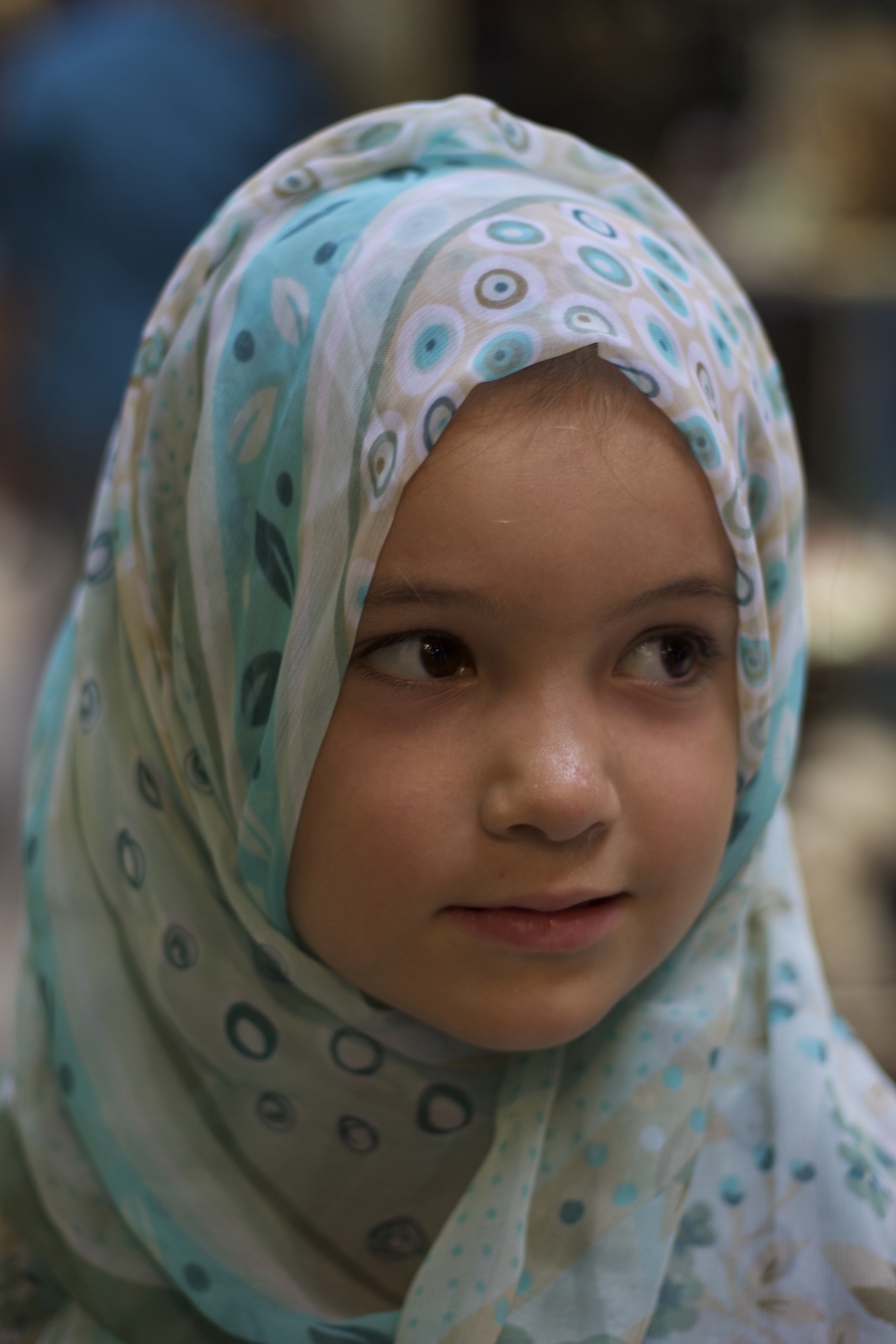 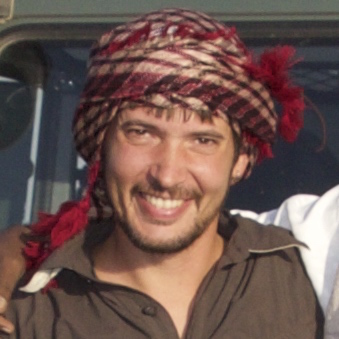 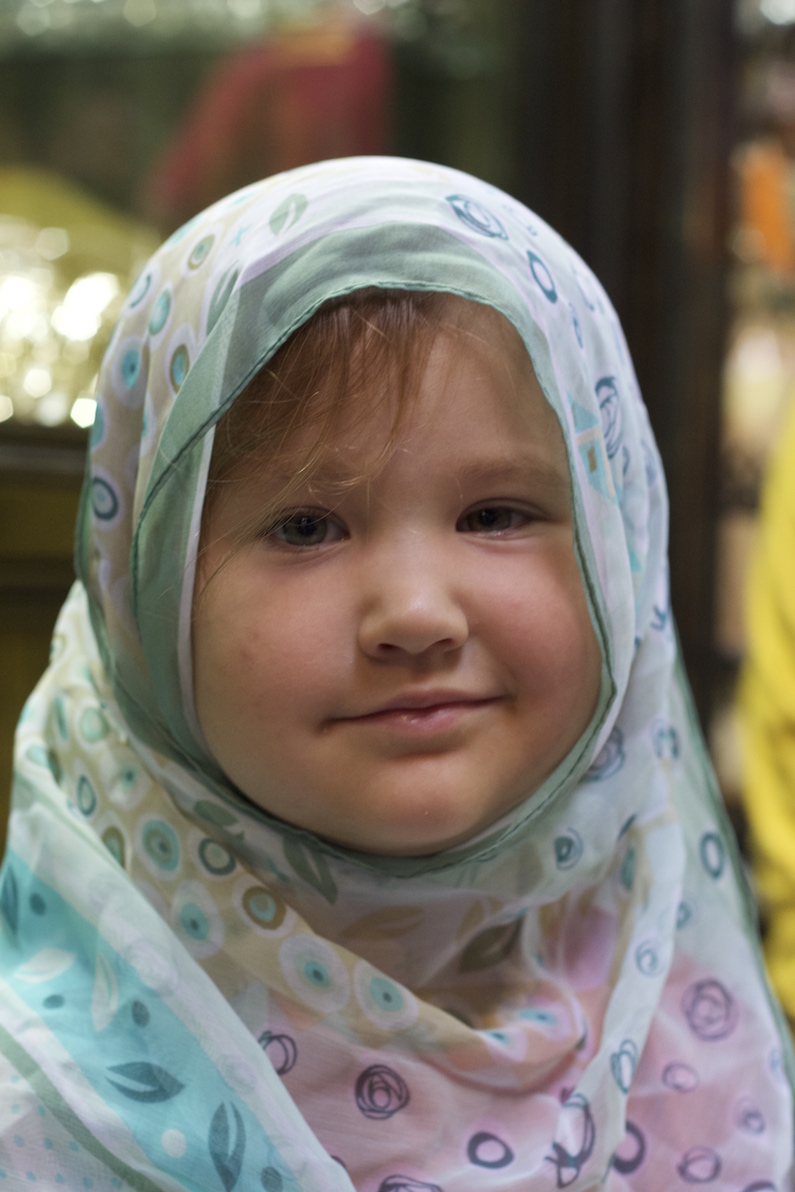 To just give one example here from entering the USA, please read the following conversation between a traveler and US-customs: "Why did you travel to the Middle East?" ... "I didn't!" ... "Your passport states that you have recently been to Egypt!" ... "Ah, but that is Africa, isn't it!?" ... For government bodies and system followers it is unimaginable that people travel to Egypt or Sudan out of pure personal cultural interest, so everybody suggests terrorist motives these days. 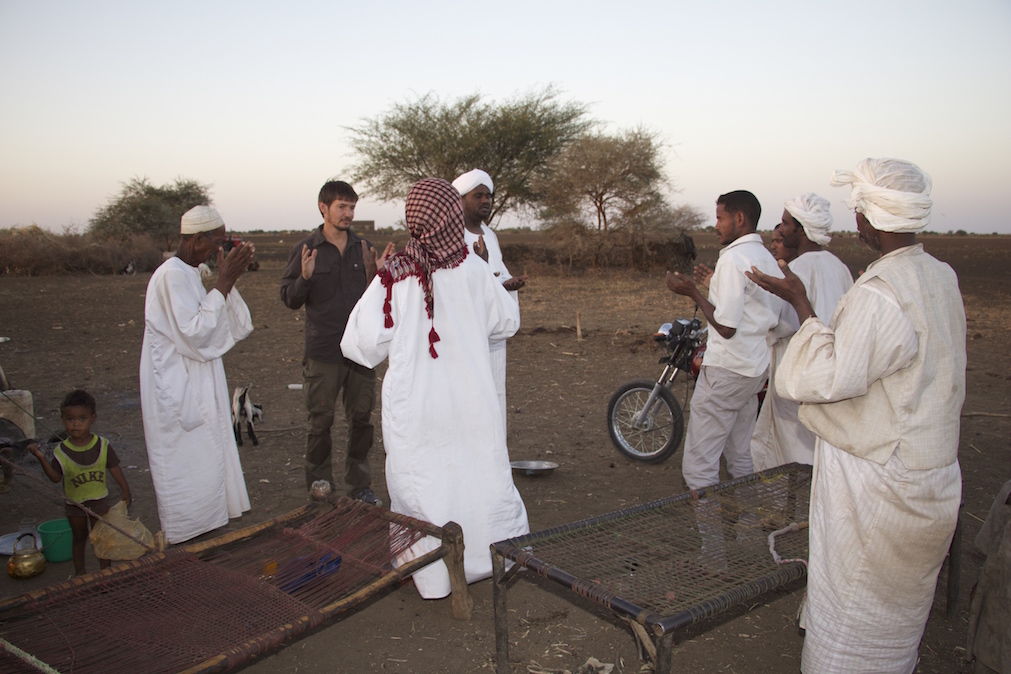 When in Rome do as the Romans do! 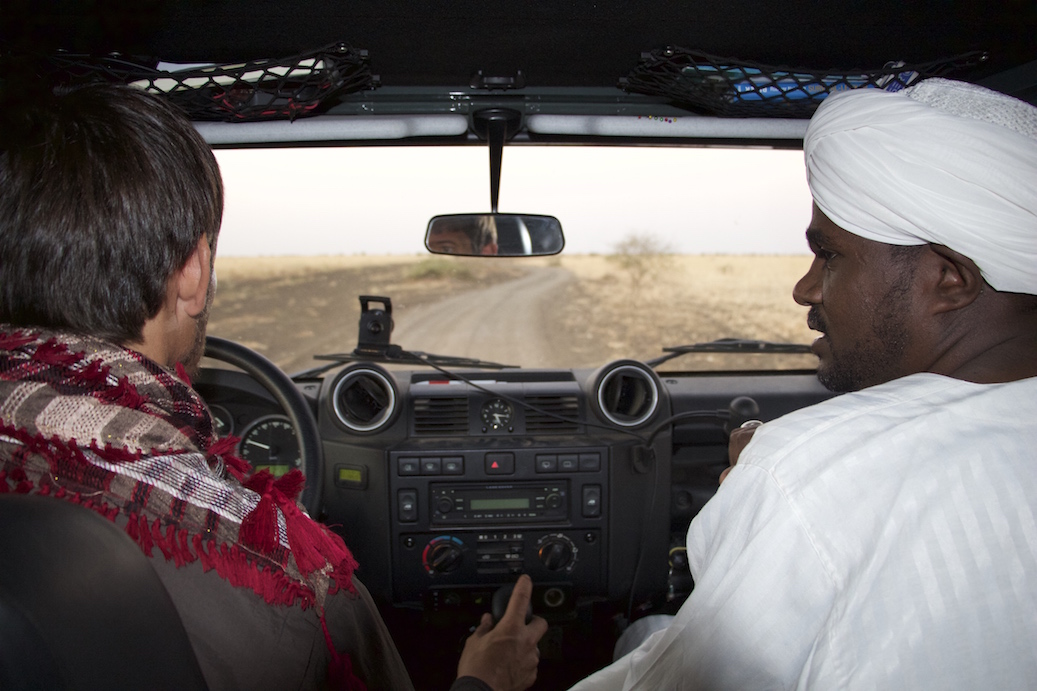 Deep in conversation without a shared language!

For families with young children the situation with long-term travel is even more difficult, because everybody assumes that because their kids have been out of the school system, they will miss out on subject matters and thus will have less good starting positions on the jobwise competition-sprint. 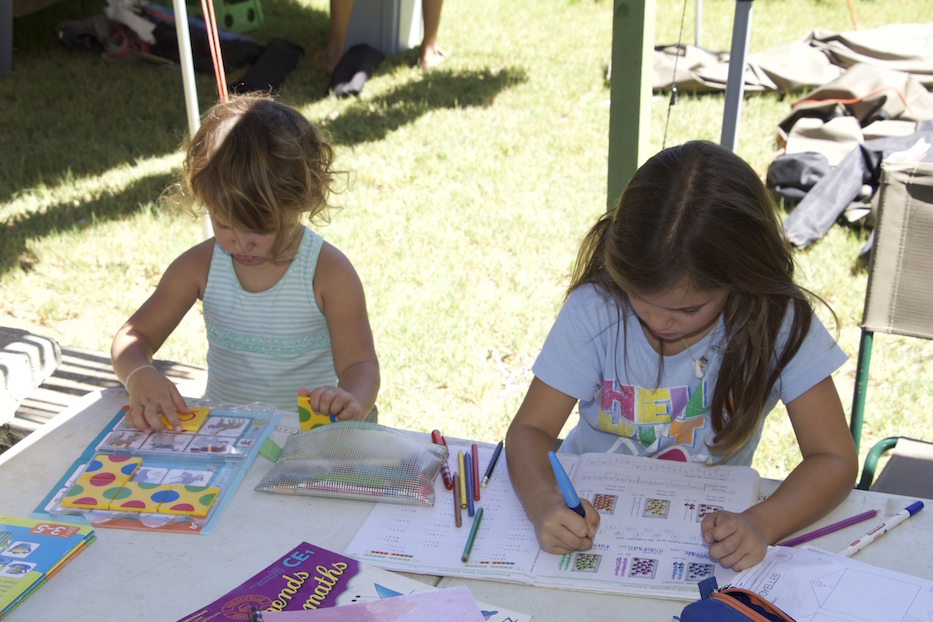 Travel school can look quite "traditional"

Because schools have been "invented" by countries to recruit young talents for industry and economy, caring parents assume that their offspring will become disadvantaged because of long-term travel. Educational failure as the result of long-term travel! We are clear that schools have always been and today especially are very intensively controlled by the industry and do not focus on education from and for the child - why else still subjects such as music, arts and P.E. are the "Cinderellas" of school subjects at ALL schools from state to private!? In this context it by the way is quite enthralling that the internationally famous "PISA-study", which compares different school systems in different countries, is being financed and controlled by the international industry and economy.

Alongside the educational aspect quite a few people assume that "travel-children" might become "asocial monsters" because they allegedly lack contact to peers. 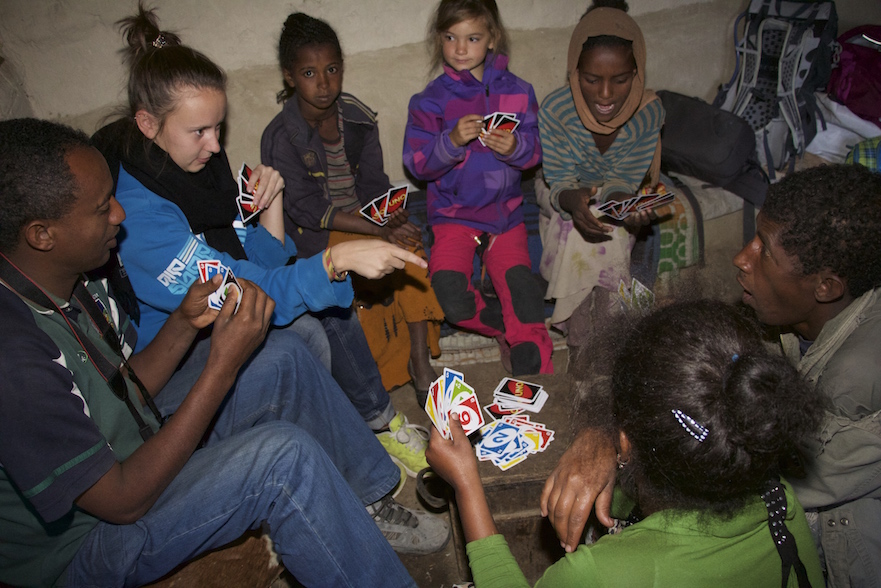 There are many opportunities for social interactions when traveling! 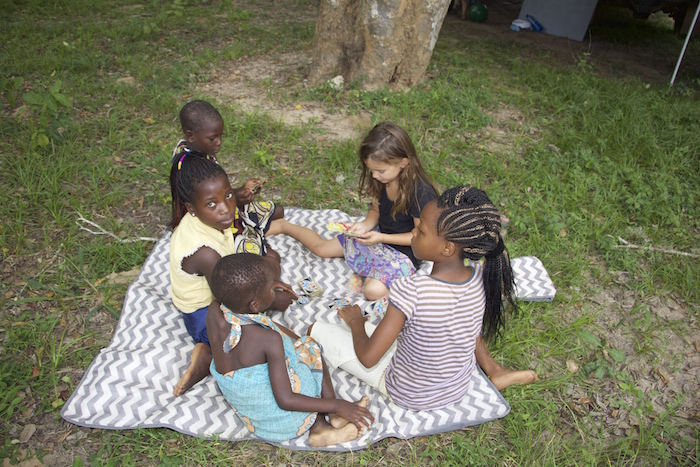 One of our former colleagues postulated before we left home that all travel-children she had met until then had social adaptive difficulties and were eventually unhappy because of that.

Additionally, parents fear illnesses and diseases and because of that don't travel. Africa in itself is life-endangering! But with the help of good means of communication when traveling, vaccinations, medication, intensive planning, good travel-insurance and consulting specialist medical doctors it is possible to reduce those risks considerably. The long-term-traveler from industrial nations is anyway privileged, as he can always "pull out the trump-card" of a hard currency in the case of any medical problem and immediately be treated in a good private hospital ... even in Africa ... and in opposition to the local population which is not able to afford any good medical care of this kind!

When hearing of our travel plans, people accused us of being egoistic because we decided on traveling long-term instead of asking our kids (which, by the way we did and thus they were the major force to change the continent we planned to travel to). 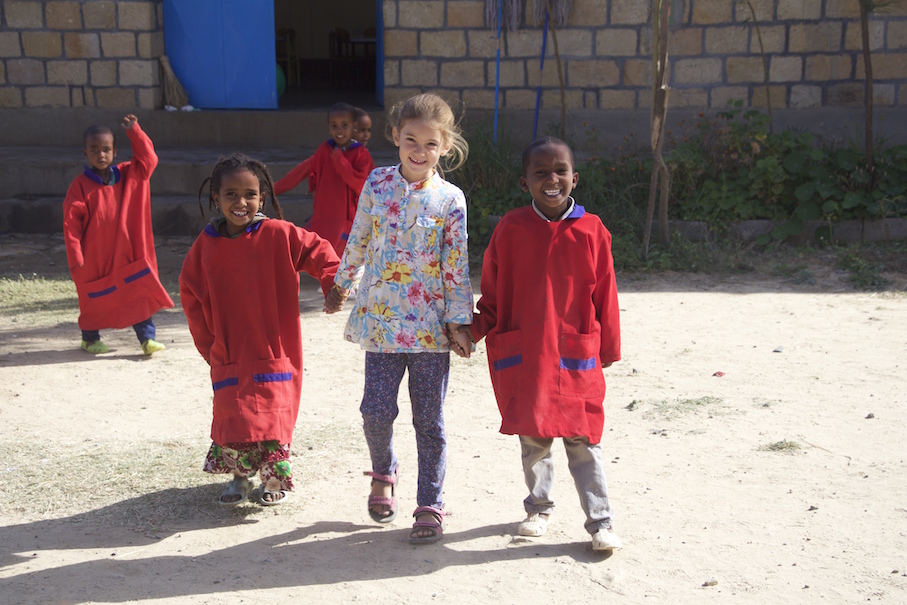 Our kids just love Africa ... and decided to come back here because in Germany they missed the warmth of the people!

Everybody reading this might be ask themselves who exactly is the most egoistic, the parent who goes to work nine to five seven days a week to earn enough money for consumerism and then when they are traveling stay at a club for two weeks and send their children to the club's child care for most of the day to be able to play tennis, go running et cetera ... or the parents who invest time in family and children and "even" do without earning a wage for a long period of time. 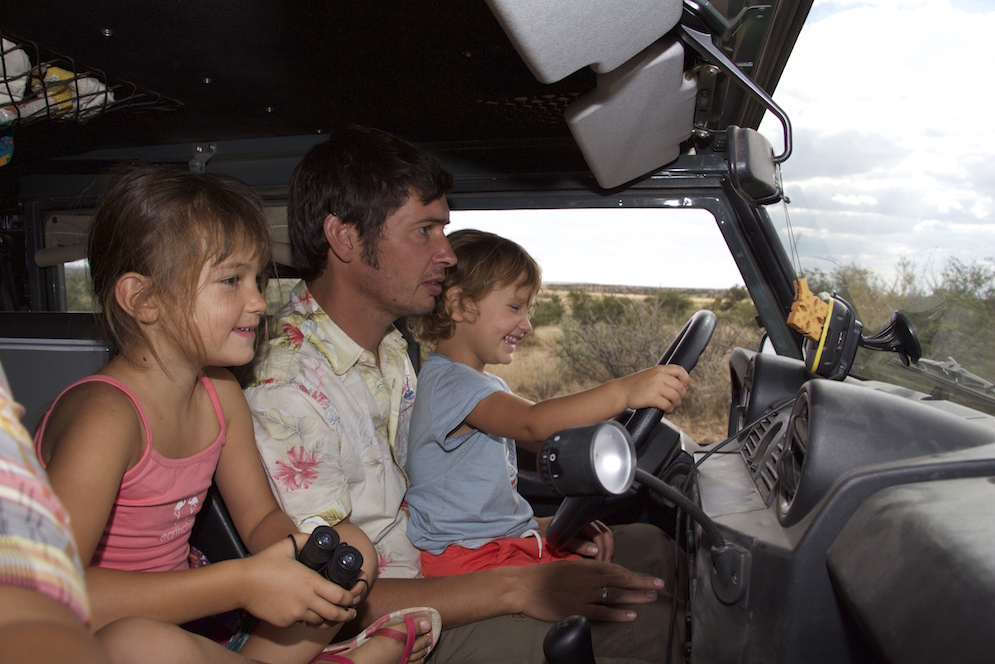 Time with their parents is what young kids really need! 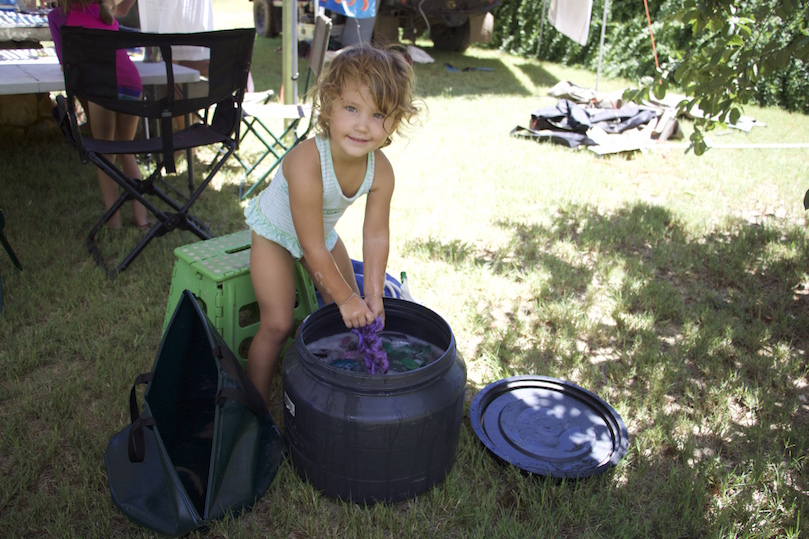 One thing that includes all the aspects described above for parents and their children alike are the media, the true "opium of the people", which are used to create a fear that makes people seek refuge in investing and saving money, over-insurance, travel-reluctance and at the same time is soothing, tranquilizing and satisfying addictions. The media-reports are the "modern sea monsters" that once used to be painted on maps at Columbus' times to instil fear in the too adventurous and restrict trade and navigatory knowledge to a small circle of insiders. People are not supposed to go out and explore on their own because they then would start to question the reports, prejudices and news and would realize that the all-encompassing fear homespun by bestseller-negative-news, half-truths and lies is completely made-up and unnecessary. People would maybe then discover that Muslims can be quite nice or African policemen not always corrupt ... the power to control and navigate people using fear would be gone then! Fairly dangerous! 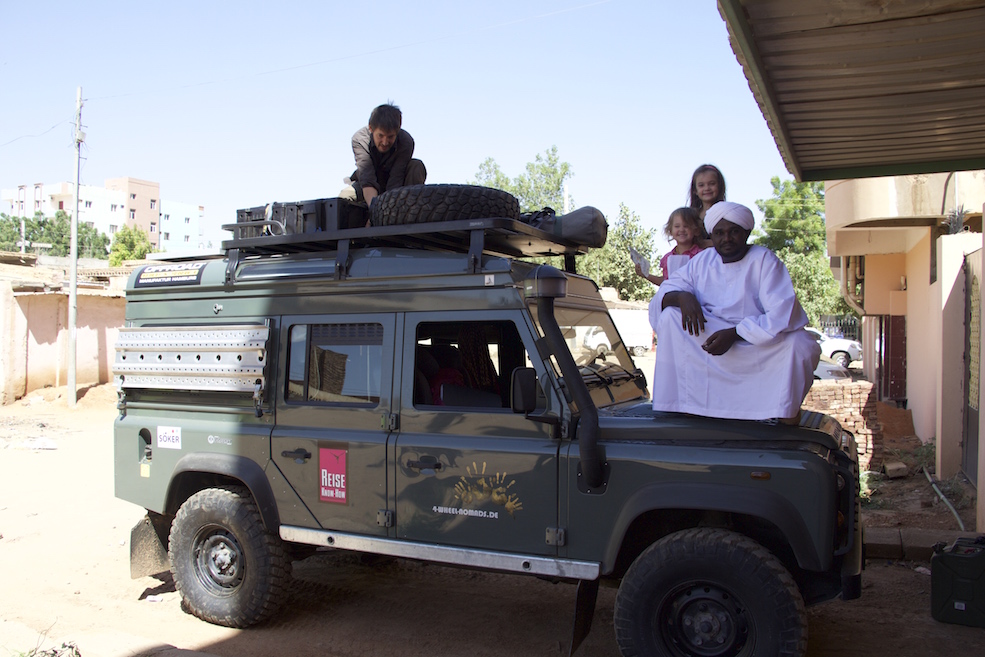 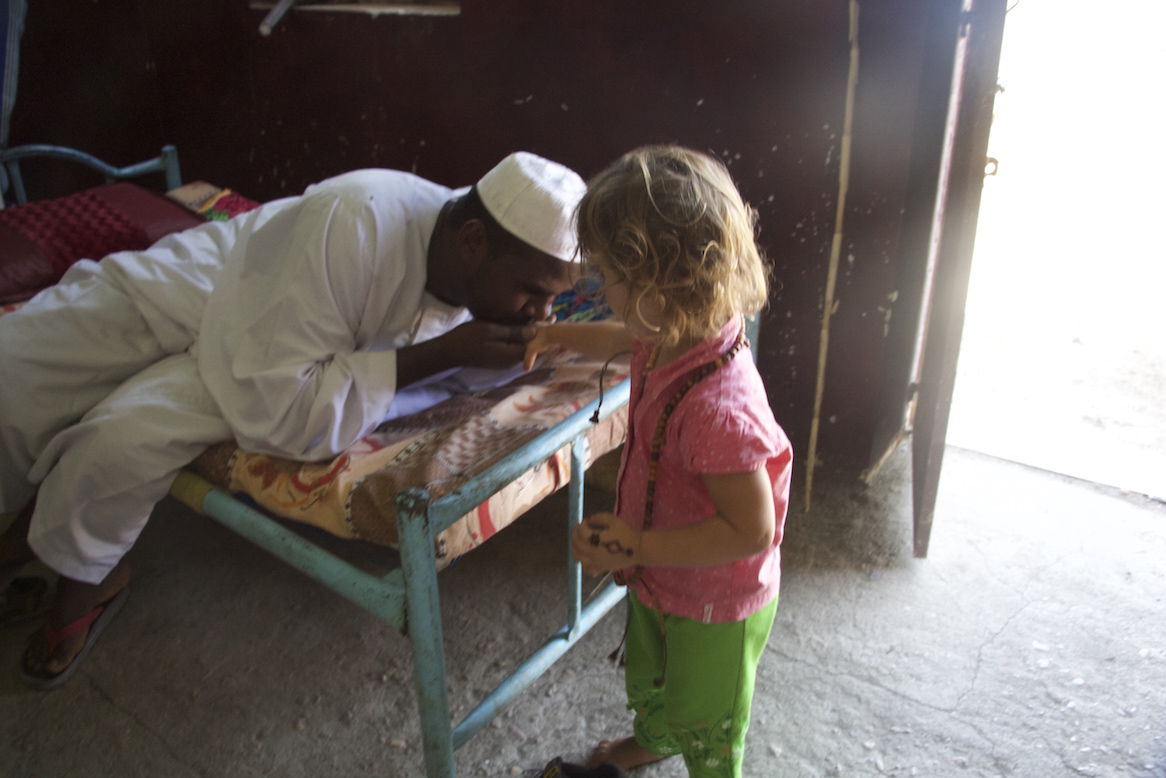 It is intended and piloted by economy, politics and media that the Germans, Europeans, "Westerners" do not travel to far away lands because of this fear and in case they travel abroad in spite of that, then at a max they should travel to "safe trade partners". The "precious Euros or Dollars" are please to be spent in the domestic economy zone and rather not travel as a form of private foreign aid to Africa! And if Africa is the destination, please only book via overpriced European travel agencies so that a substantial part of that money can be skimmed at home instead of traveling individually without any pree-bookings!

But what is the real situation like during a long term travel concerning the aspects and concepts above?

Traveling definitely is an absolute "eye opener"! Apart from many learning experiences on the more intellectual side the most essential new experience caused by travel is to learn how to get rid of your fears. These fears eliminate themselves in any case when people realize that the "world outside" is not as bad as the media make us think it is.

For us it was for example quite scary at the beginning to wild-camp somewhere in the Sudanese desert because due to one-sided media cover, Sudan is considered an "absolutely dangerous country". 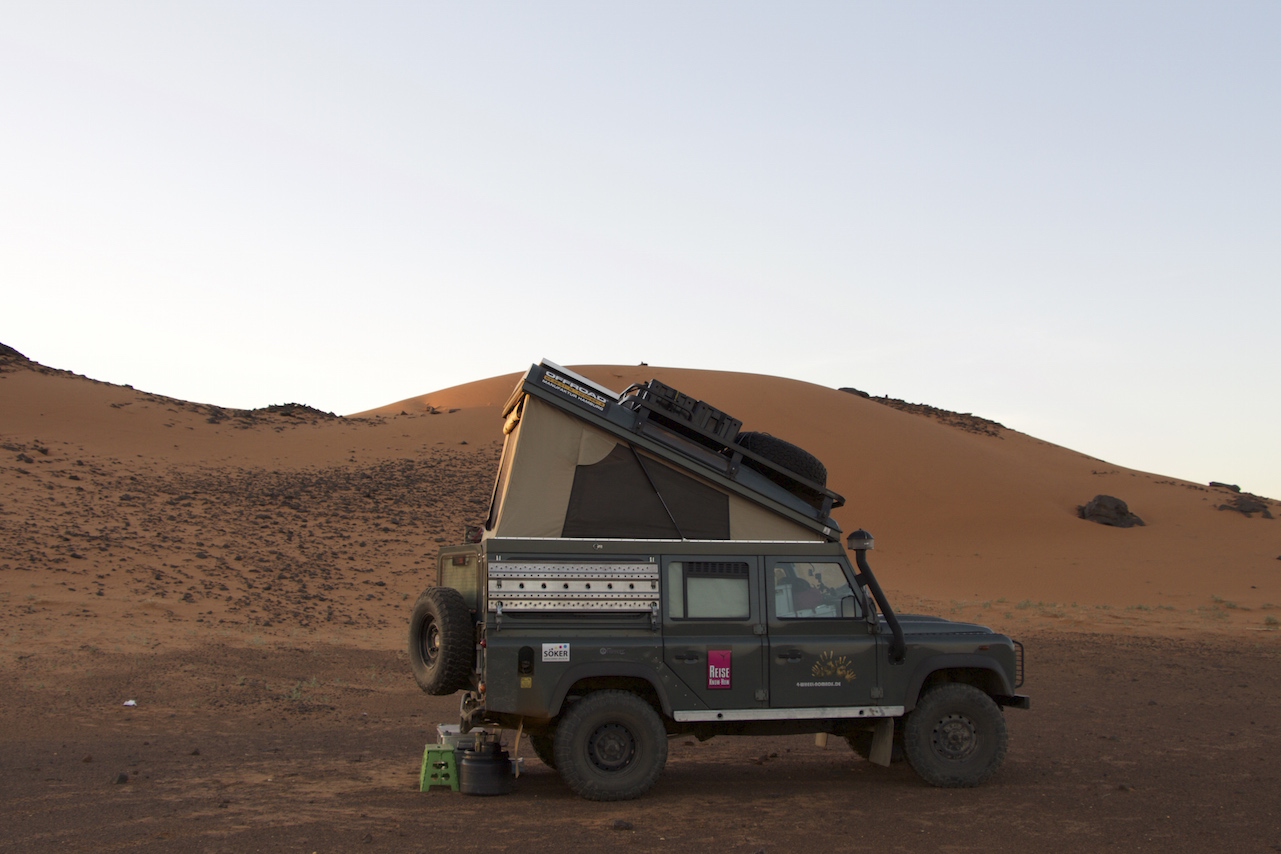 A wild camp in the Sudanese Sahara ... very relaxing and deeply touching instead of being dangerous!

We have finally camped wild regularly in Sudan and have felt very very safe, safer actually than in other places in Africa or even Europe! 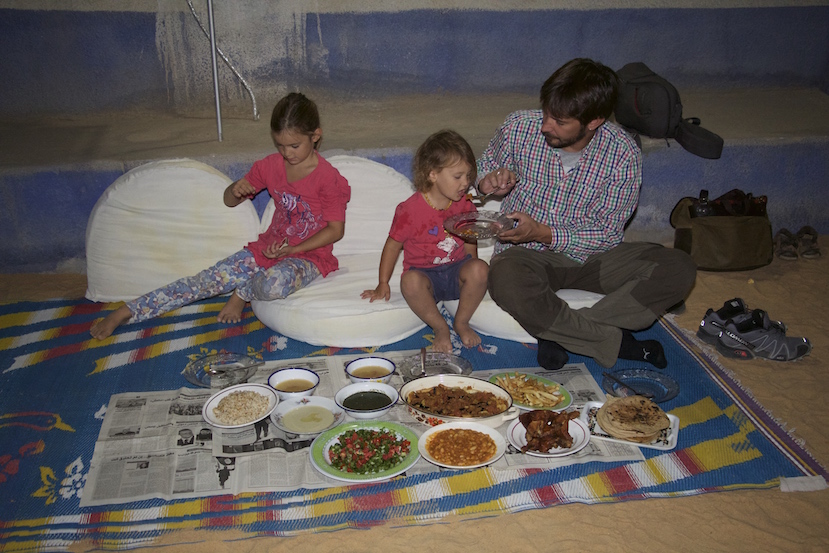 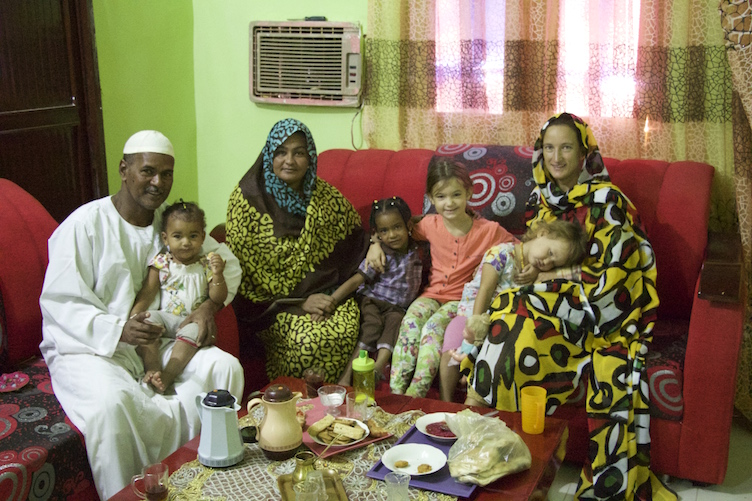 An intensive openness concerning new situations is something that "just happens anyway" when you are traveling outside of your comfort zone and cultural sphere.

At the same time one learns to restrain oneself on the bare essentials. 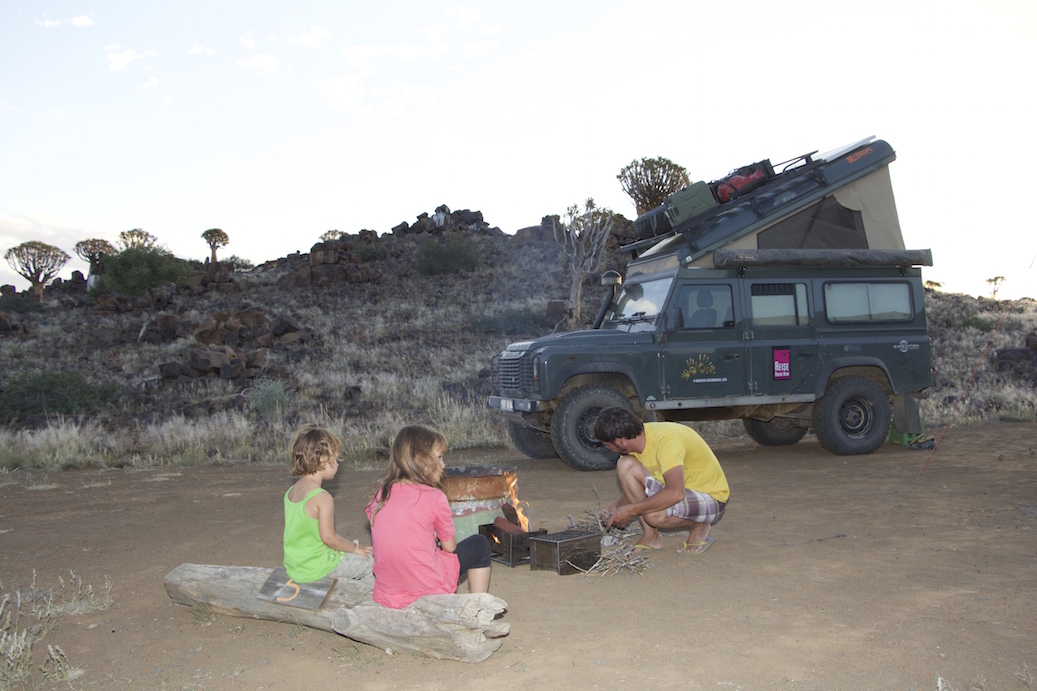 Everything has to fit into the "small" Land Rover ... bare necessities of life!

With that, you automatically leave the consumerist-competition and instead of consuming "things" one indulges in deep, intensive human encounters ... traveling definitely also is making a move to a more social being. Once people asked us whether it is not boring not to build, create, construct something for one complete year ... our answer was and still is, "We do exactly that: we establish new ties and relations and stabilize those within the family, with the partner and with our children.

But what about the problem areas concerning children and education as stated above?

While traveling we have witnessed how our children "naturally" learned a foreign language, English, without any teacher in the traditional sense and without any learning material. 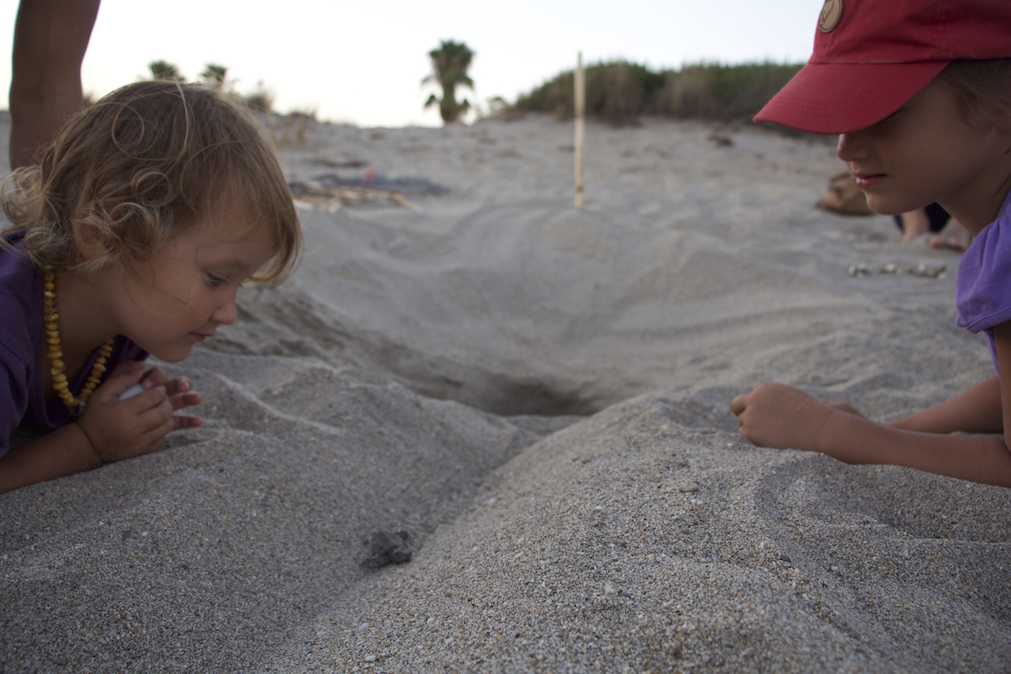 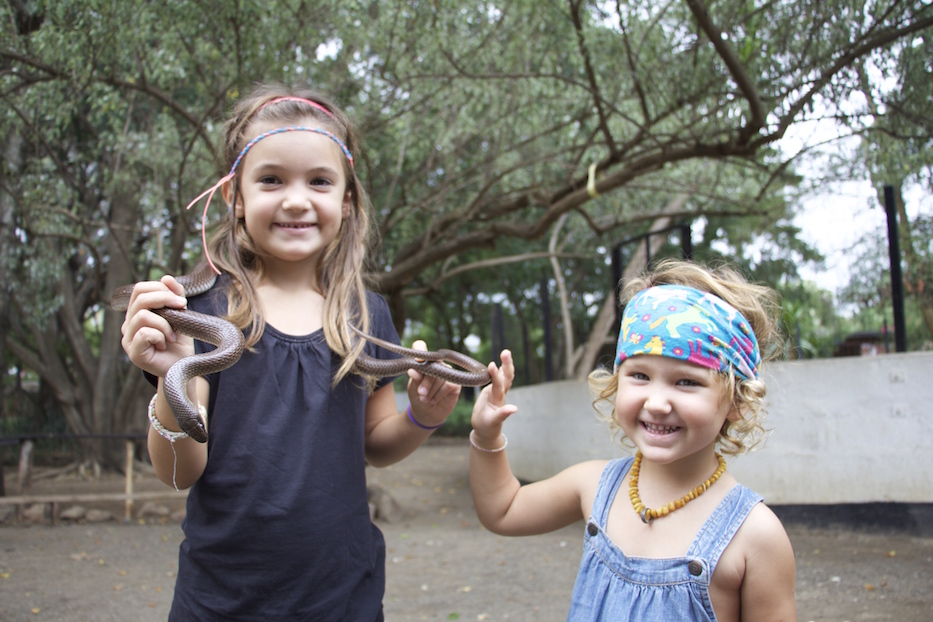 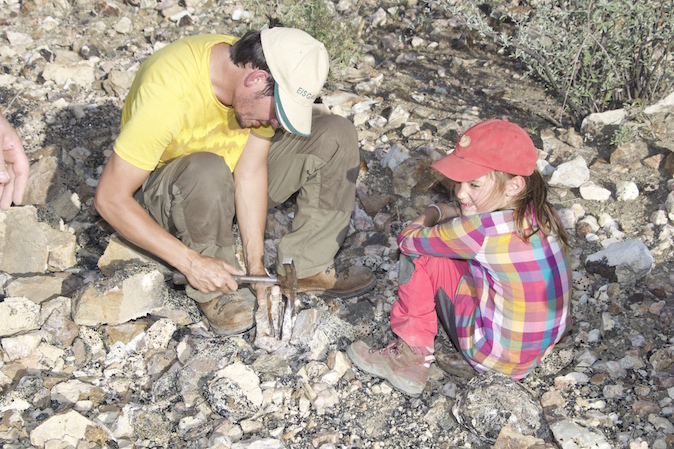 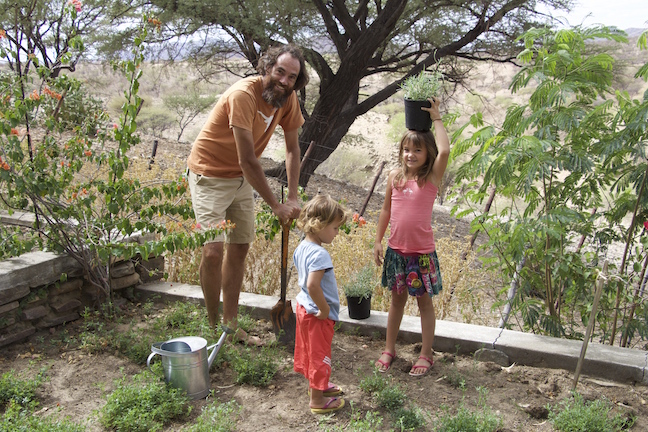 Furthermore, our two daughters were allowed to find out about their limits, could test themselves and by that find a different "inner ease of mind". Definitely, our children have become more culturally aware and also more cosmopolitan and open minded. 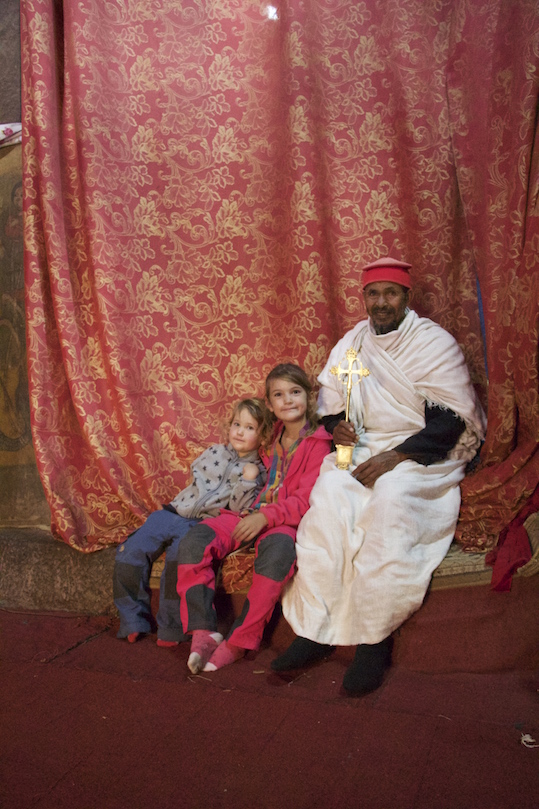 Life in the open in combination with more attention by the parents (who don't have to go to work) and simply more time gives the chance to include the children in many ways in travel planning, navigation, cooking, car-maintenance et cetera. 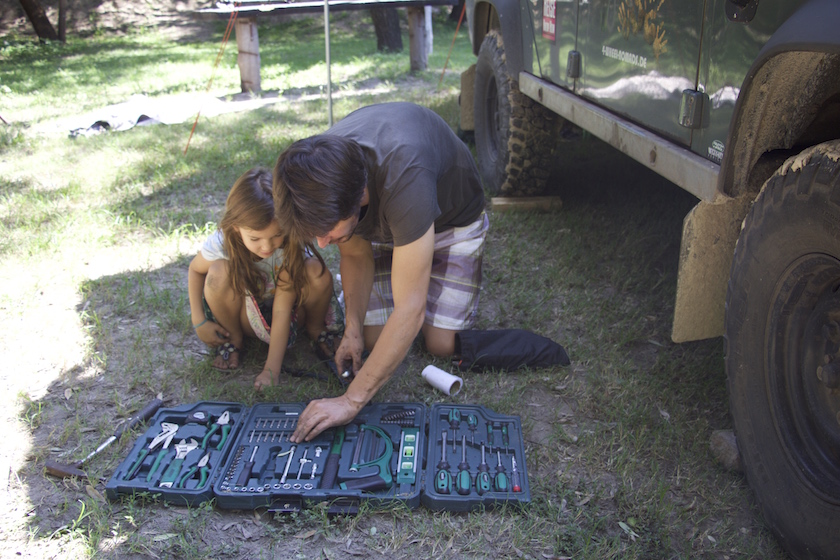 The great majority of contacts kids establish to other traveling children, adults and Africans of all ages are not rational but highly flexible and creative, especially when it comes to language(s)! At the same time even very young children learn a natural media competence by communicating with family and friends at home using emails, Facebook, Skype and the such. 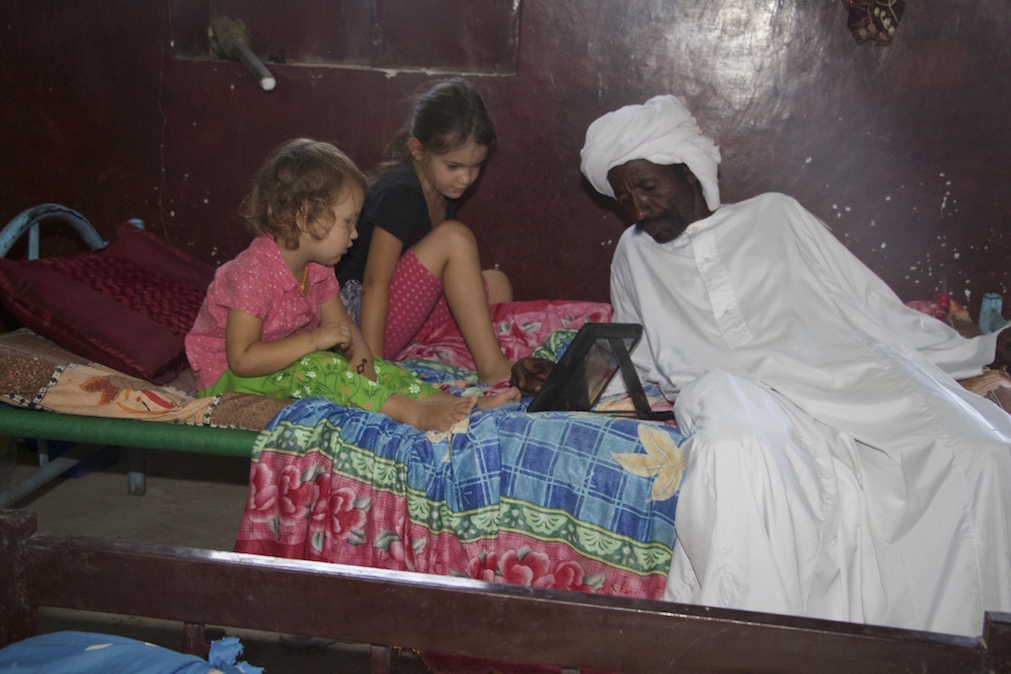 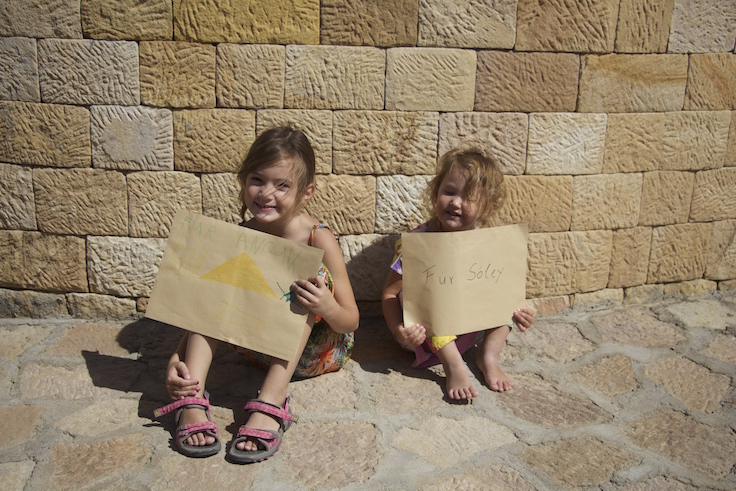 Believe it or not: our kids so far have not become "asocial monsters" - quite the contrary is true! 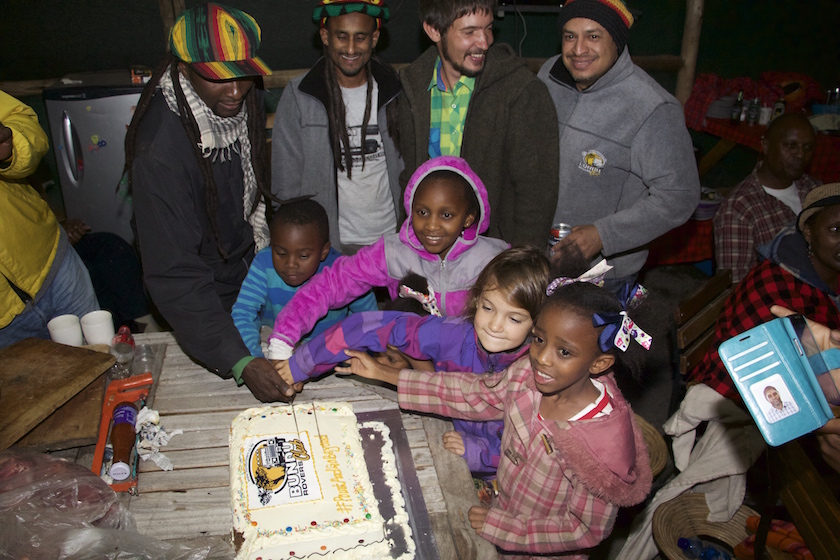 Still, extended travel is not a "universal remedy" just as any "prenatal musical character coining" of all children using Mozart without taking into account the mother's favourite music is! Certainly, we don't want to persuade anybody and we also don't want to be fundamentalist in this direction! Those who love traveling will love long term travel and will profit from that and will experience great benefits in their children. Even the people you meet on the road will benefit from these encounters! On the long run travel will establish more mutual understanding! In addition to that long-term travel enables you to spend relaxed and intensive, sometimes challenging time together as a family and escape the competition about power and consumerism for a while! Certainly, after such a travel one has changed many points of view in many different fields!

For sure, we don't want to give the impression here that everybody HAS TO TRAVEL! There are many ways of living and what we do is just one of them! With this blog post we try to discuss why the majority of people in "our world" might fear long term travel! ... and we want to provide "food for thought"! 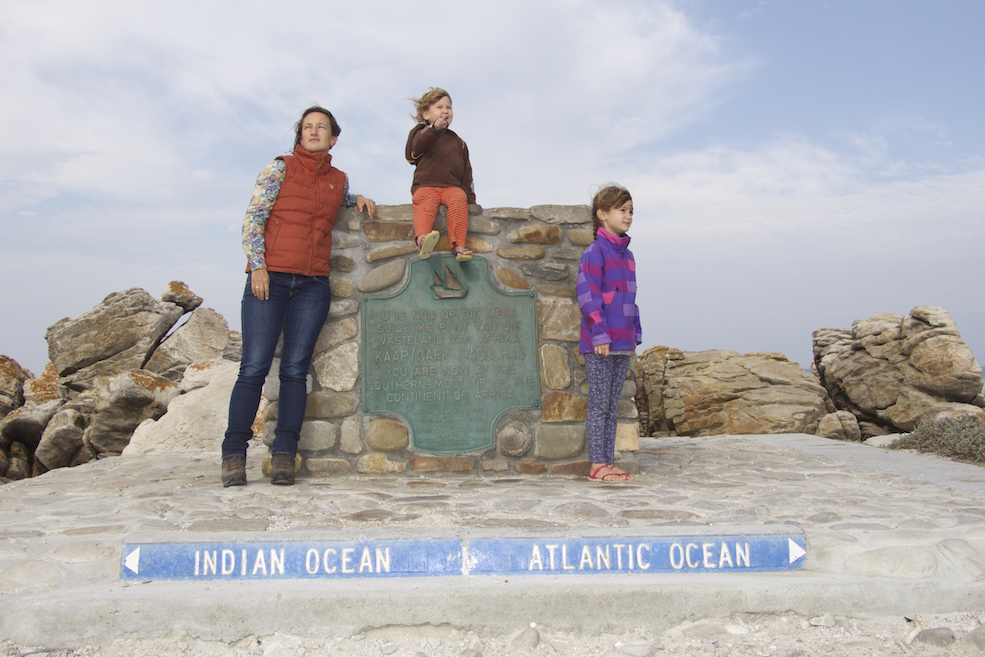