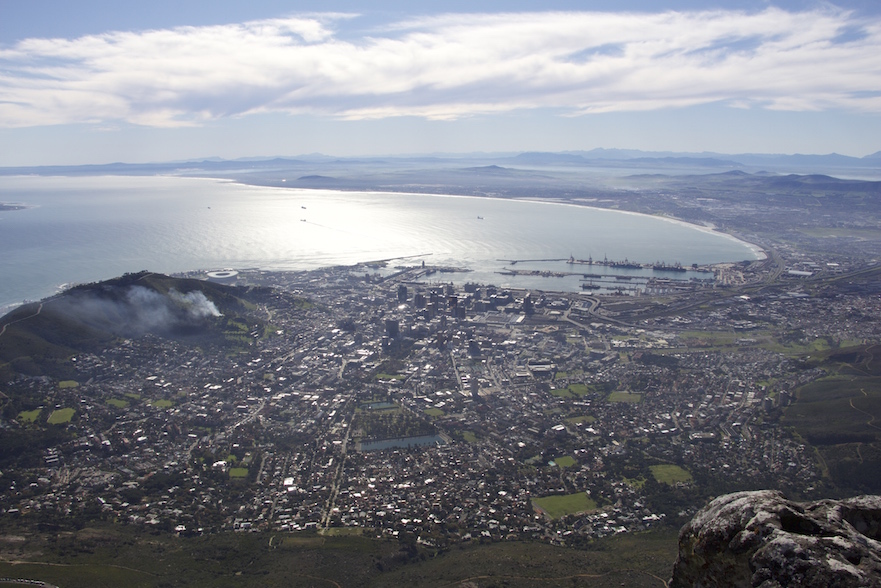 Cape Town as seen from the top of "Table Mountain"

"Kaapstad", founded in 1652 by the Dutch "United East India Company", for us was one of the destinations much longed for ... What a thriving, beautiful, colorful and multi-cultural city! We are absolutely enthusiastic!

But Cape Town also turns out to be a city of contrasts and extremens: as true with many places, towns and cities in South Africa, here the world of tourists, of "the poor and the rich" and appalling poverty are cheek by jowl, European shaped South Africa and "magical Africa" directly clash, but also modern city-life and wonderful, nearly pristine nature are neighboring each other.

We are lucky to have the chance here to see and experience this city through the eyes of several quite different inhabitants and thus are allowed to witness the diversity of this cosmopolitan metropolis in Africa and learn about different stories, impressions, opinions, visions and schemes of life. Sadly, also typical for South Africa is the fact that we don't really have many opportunities to learn about the "dark skinned face" of the country as many sectors of everyday life in this country are still separated ... people do still not mix as they should here! One example for the fact that racism and prejudice still play a role in the mindsets of many inhabitants of this city and South Africa is shown in the expression and concept of the "coconut", a word used by dark skinned South Africans to describe other dark skinned Africans who have "white" friends ... they are "brown on the outside but white on the inside", just like a coconut!

In the Cape Town area we initially live with Wynand, Eulouka and Ayla Stolp in Somerset West, one of the neighboring towns of Cape Town. 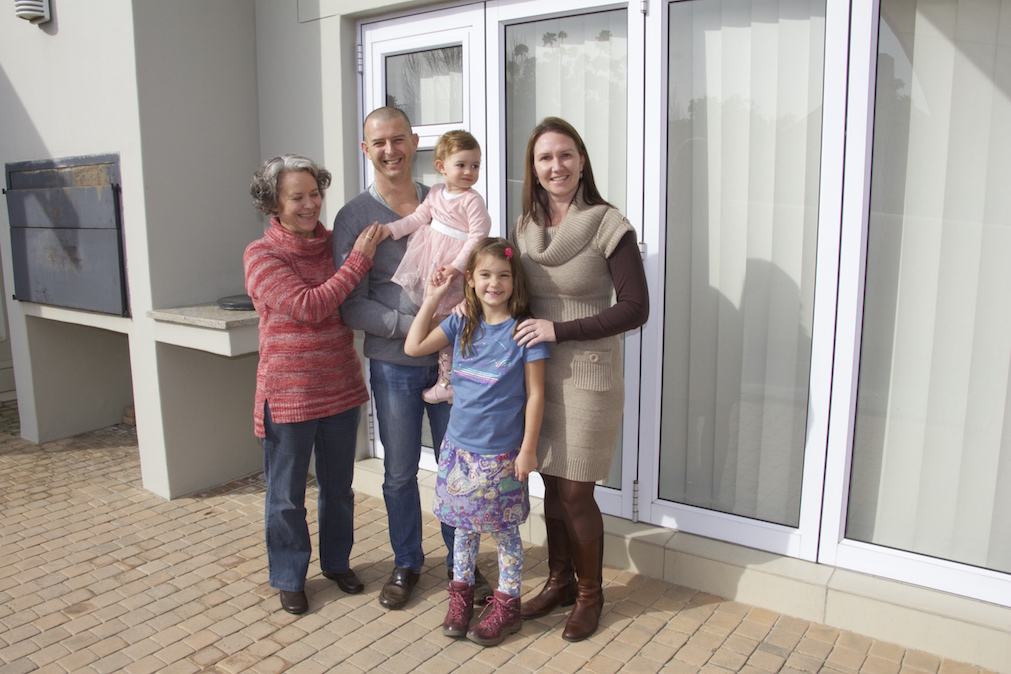 The Stolps from Somerset West 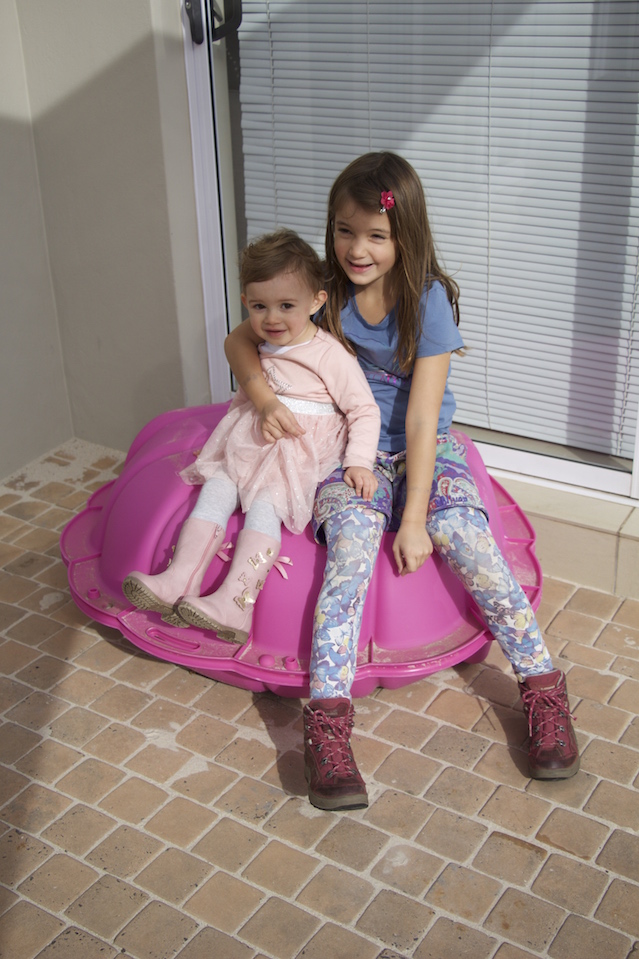 The Afrikaans-speaking family Stolp are travel-friends we met in Ai Ais Springs in Namibia.

Afterwards we stay with the Calder family in Newlands, directly below the eastern cliff of impressive Table Mountain. 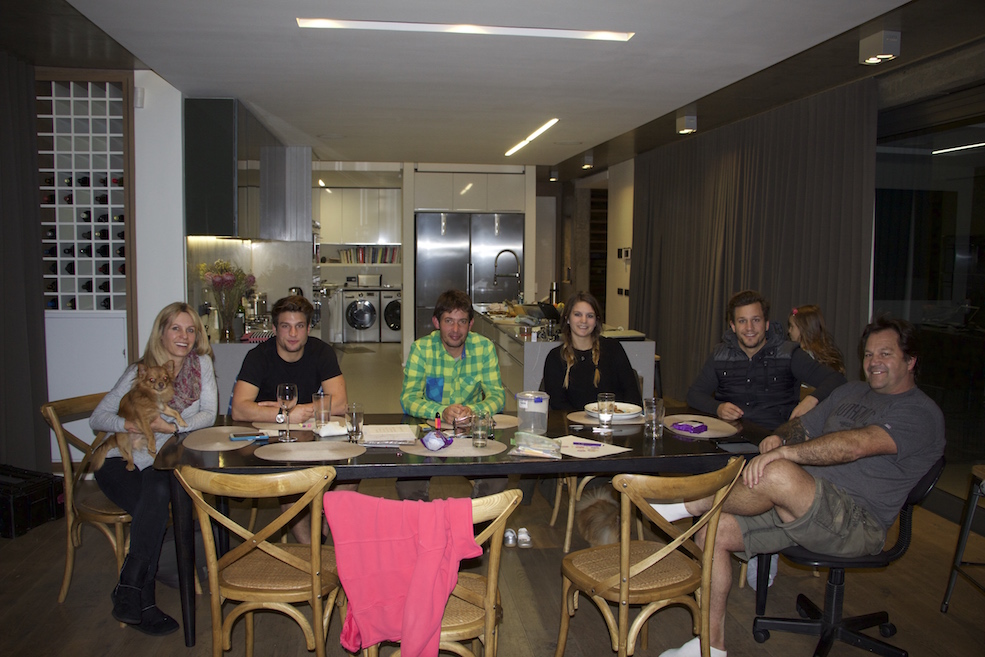 The Calders from Newlands 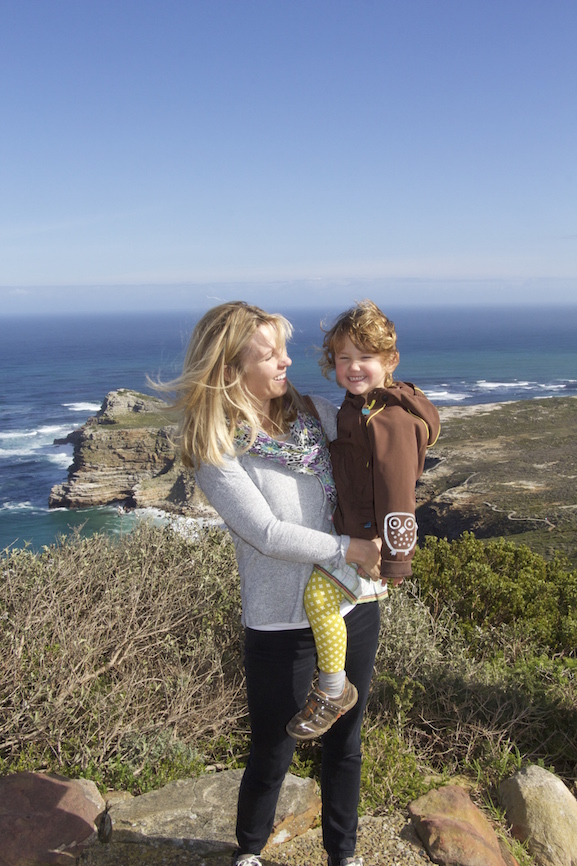 Kathy and Sóley at "Cape Point" 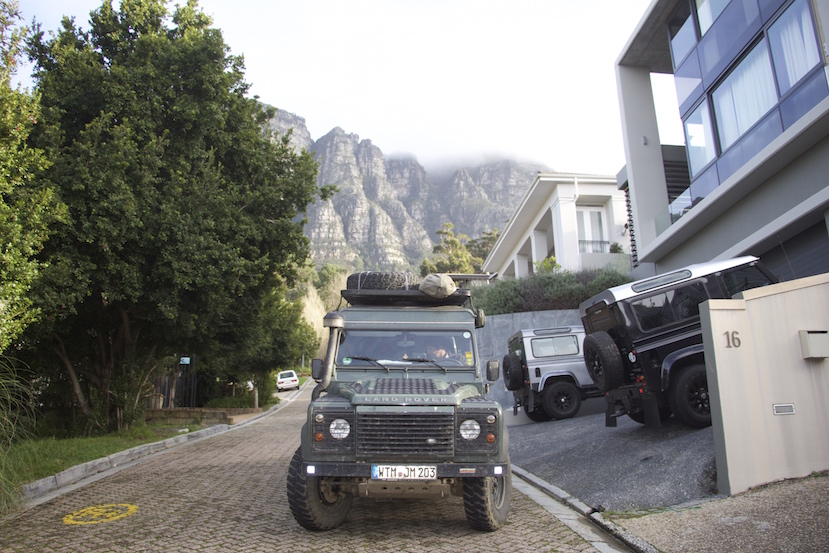 "Table Mountain" is just up the road. 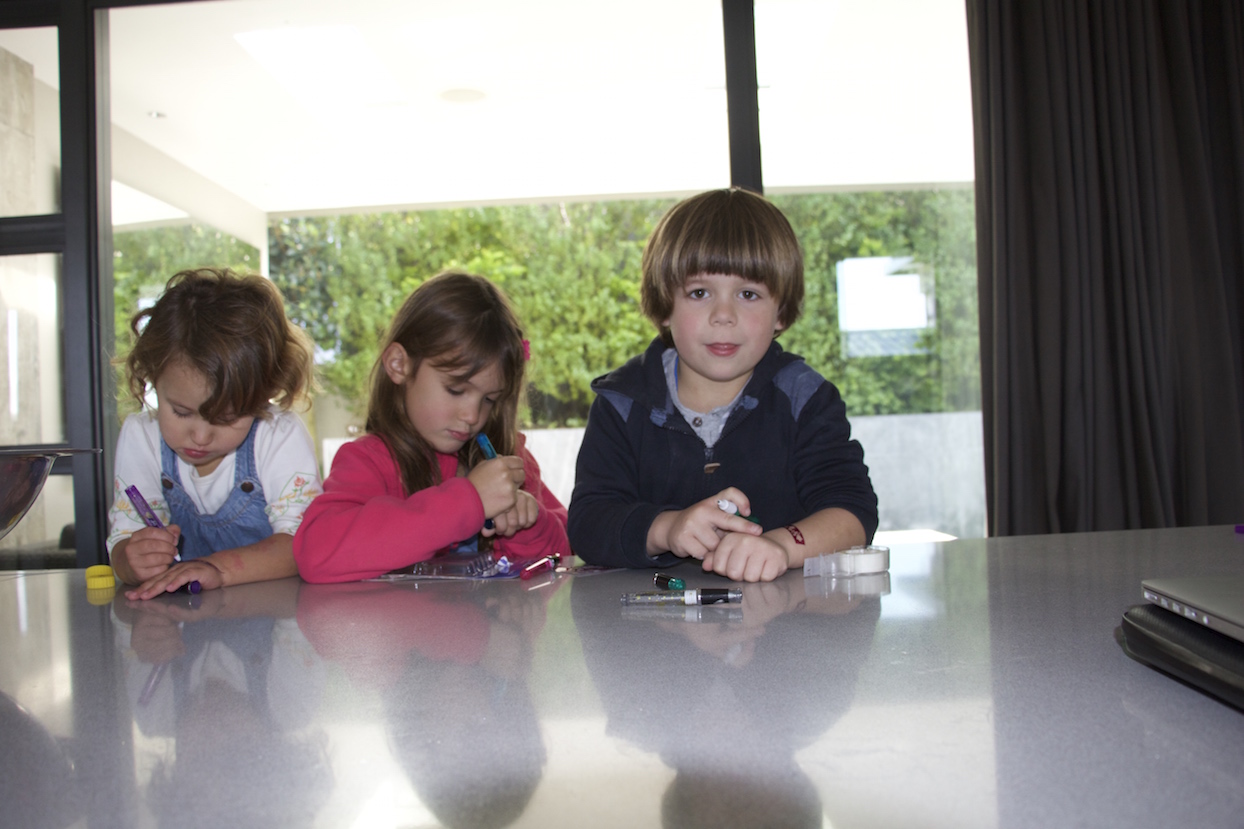 The English-speaking Calders invited us via e-mail and virtually "picked us off the street" because they had followed our blog right from the beginning and also share the Land Rover passion. 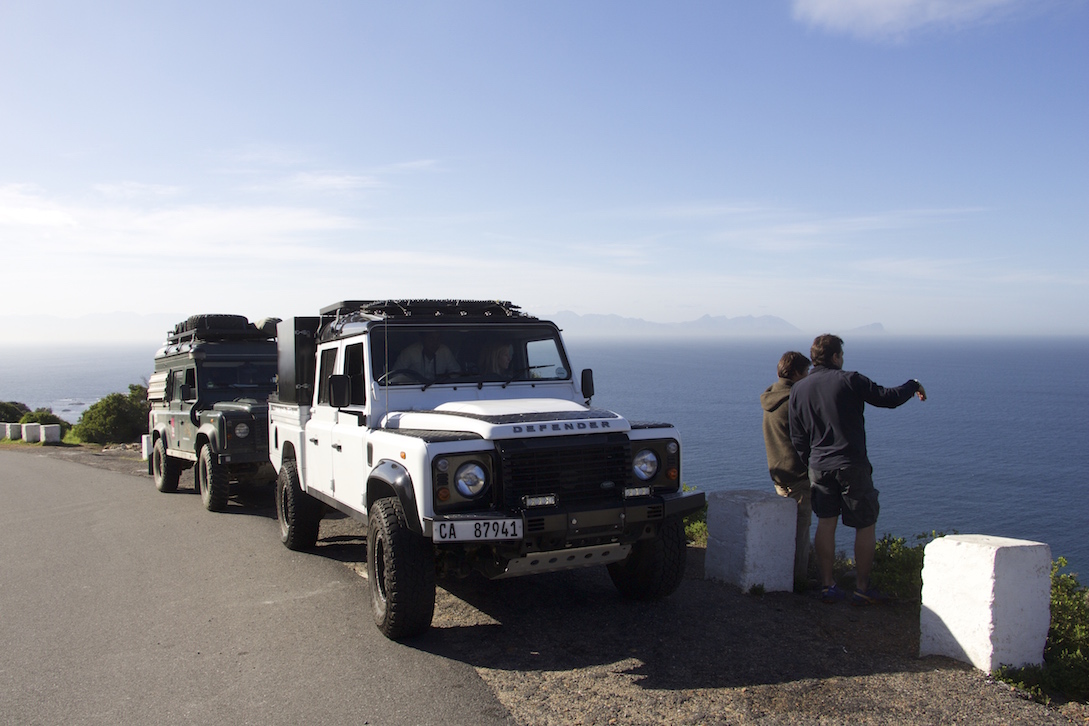 For the coming (European) summer, we already work on common travel-plans for a trip through Scandinavia when the Calders will take their Landy from West Africa via Europe back to South Africa along the "eastern route".

Parallel to that we meet our old friend and fellow islander Johanna again here, who left Germany some years ago to study in South Africa and didn't leave. 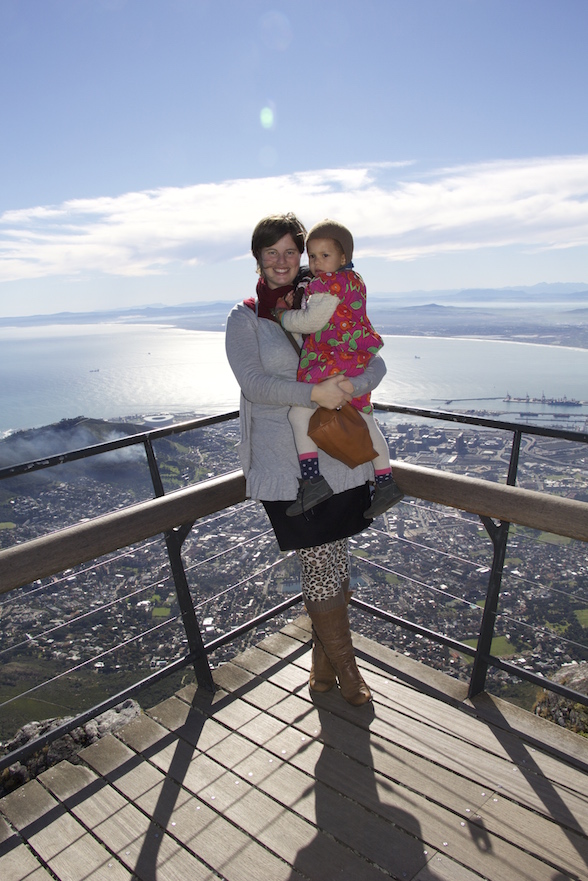 Since her own volunteer experiences Johanna supports the "Weltwärts"-Program of the German government and mentors volunteers at the "Zenzeleni Waldorf-School" in the township "Khayelitsha". 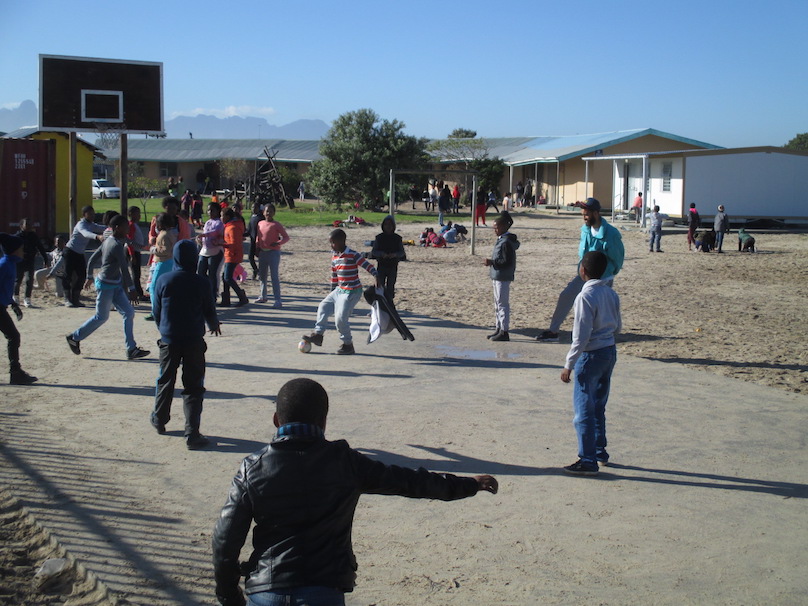 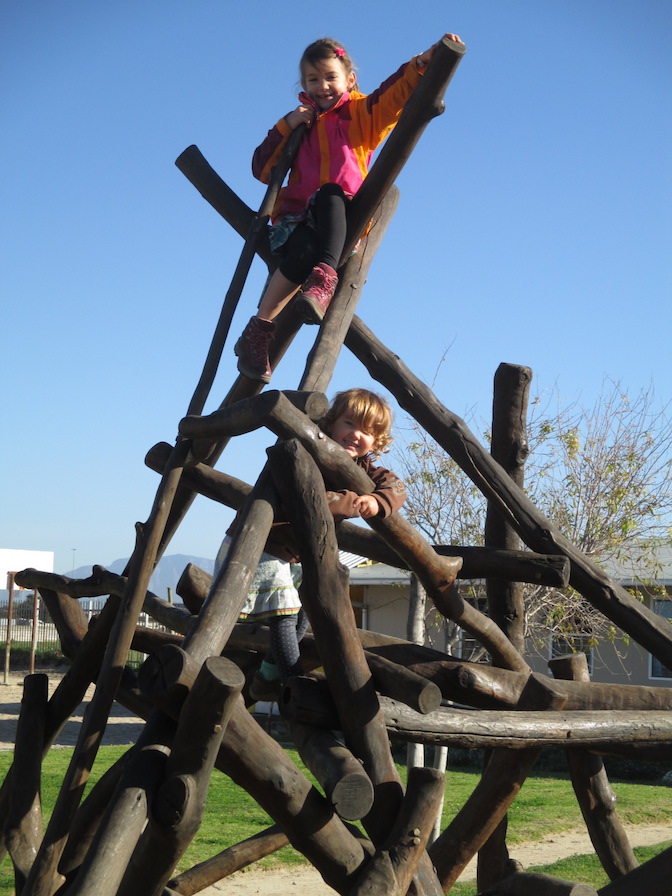 ... and the playground - always the most important place for our kids.

Khayelitsha is one of the biggest townships in South Africa and has between 2 and 2.4 million inhabitants who mainly live in huts made out of corrugated iron, wood, cardboard and tarpaulins. During a visit in the township we were not only impressed by the sheer size of this place, but also by the poverty in which so many people live. At the same time the number of sattelite dishes on even the most ramshackle huts is impressive and all huts are connected by a web of power cables. Completely "strange" for our European palate and eyes are the "snacks" you can buy along the roads: chicken feet and sheep heads.

We also meet our Namibian friend Stefanus from Windhoek again, together with his brother's family who works as an eye doctor here in Cape Town. 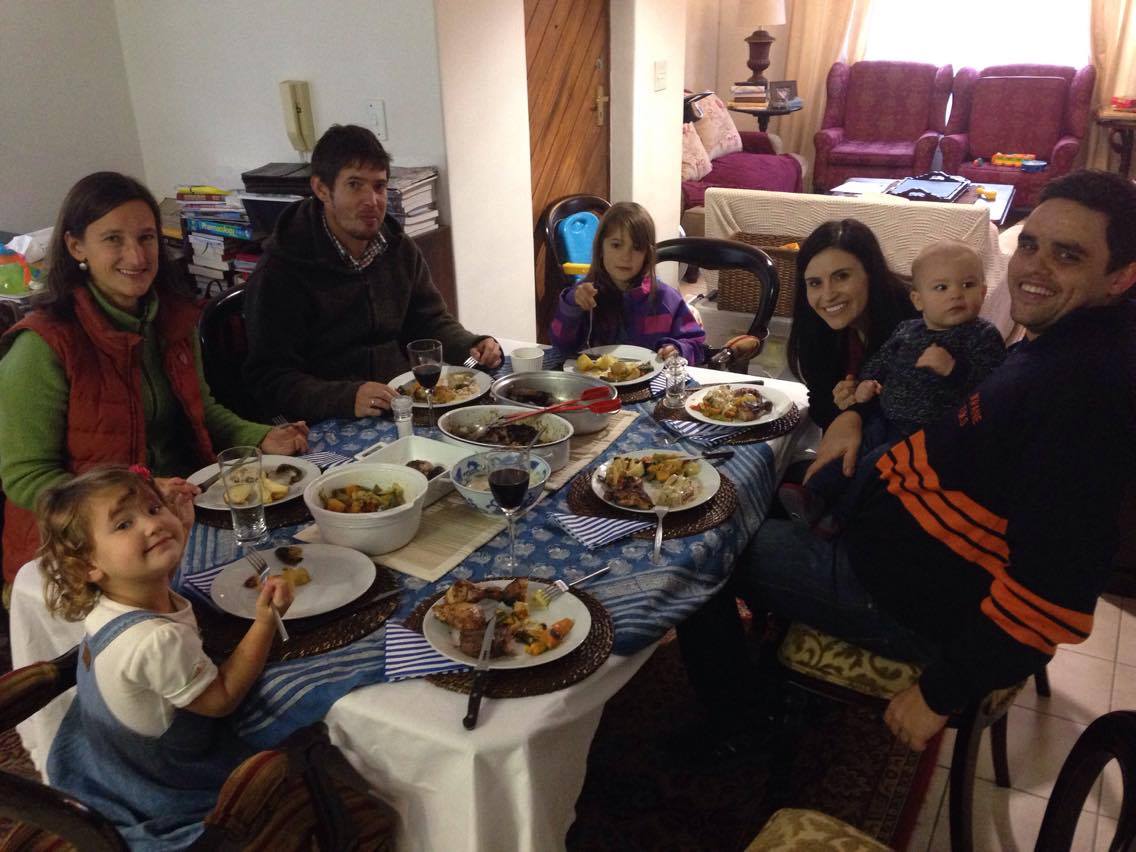 Juliane meets her Au-Pair colleague Robyn again who she had met sixteen years ago in North Carolina. 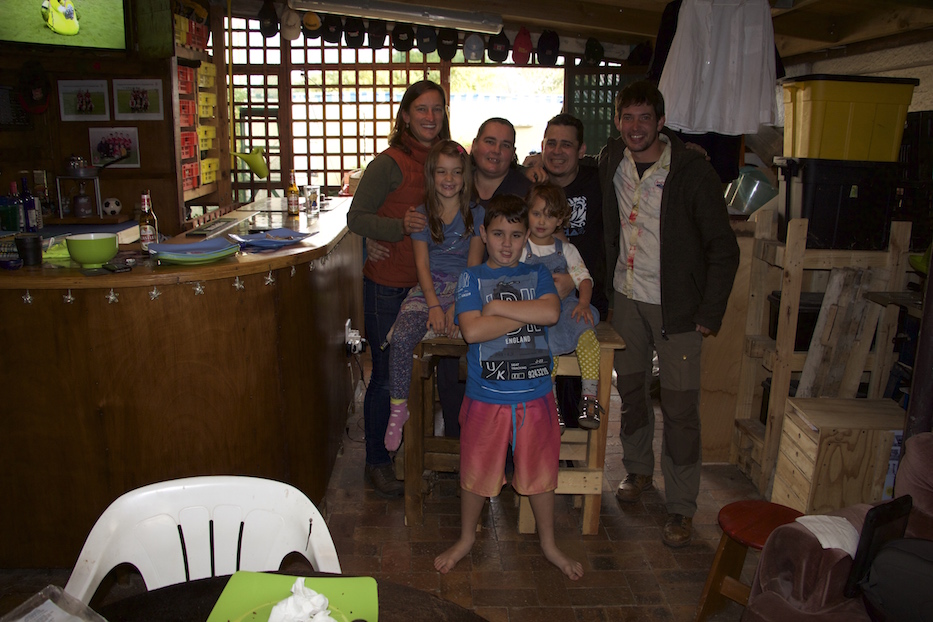 Robyn, her family and us.

Apart from our favourite pasttime "meeting people", in Cape Town we finally are able to shop for things we need at home and also replace some of our excessively worn-out pieces of clothing.

Of course, sightseeing is also on the agenda: we visit and study the penguins in in "Betty's Bay" and "Boulders", drive the Land Rover to "Cape Point", take the "Cable Car" up "Table Mountain" and visit the "Botanical Garden Kirstenbosch". 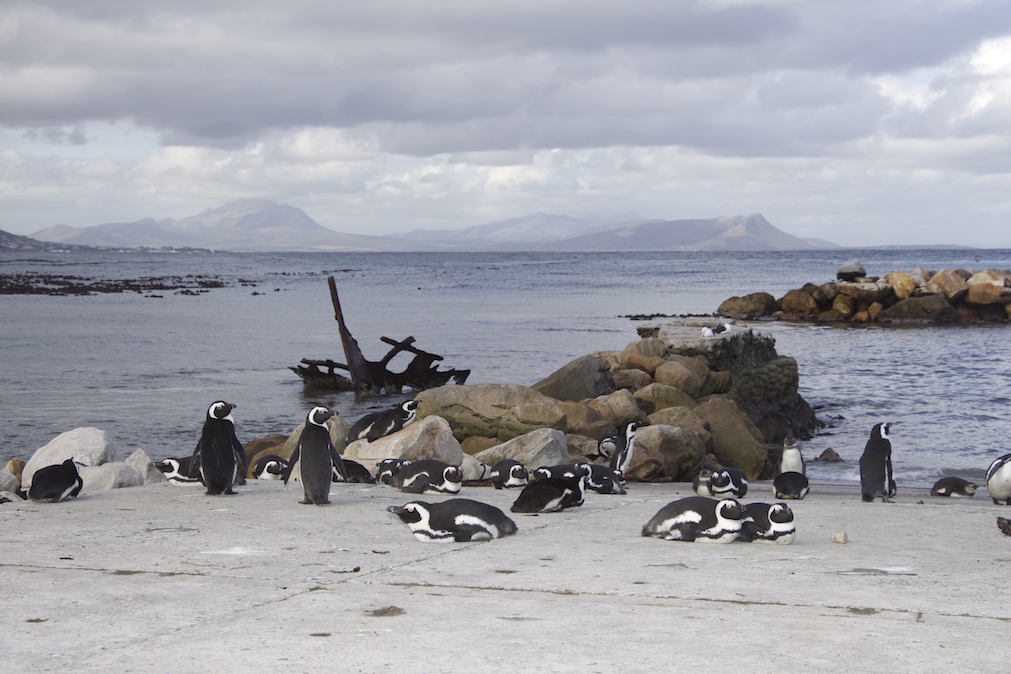 Penguins in Africa! The "African Penguin", the only penguin nesting in Africa is also called "Jackass Penguin" because of its donkey-like sounds 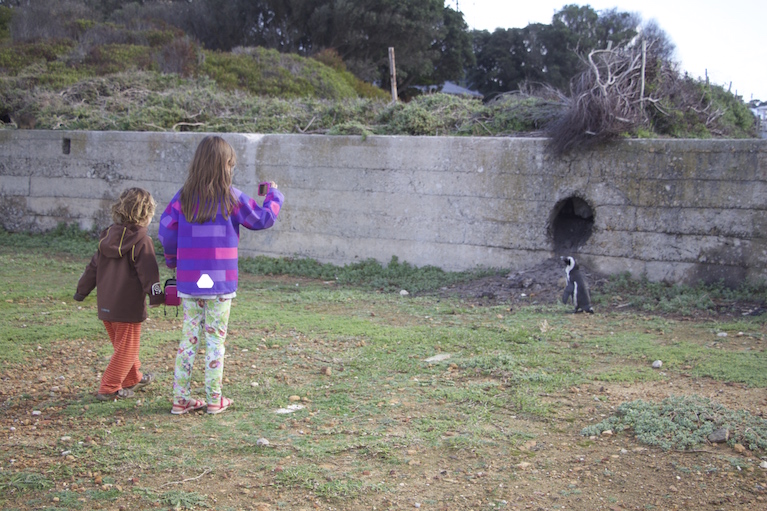 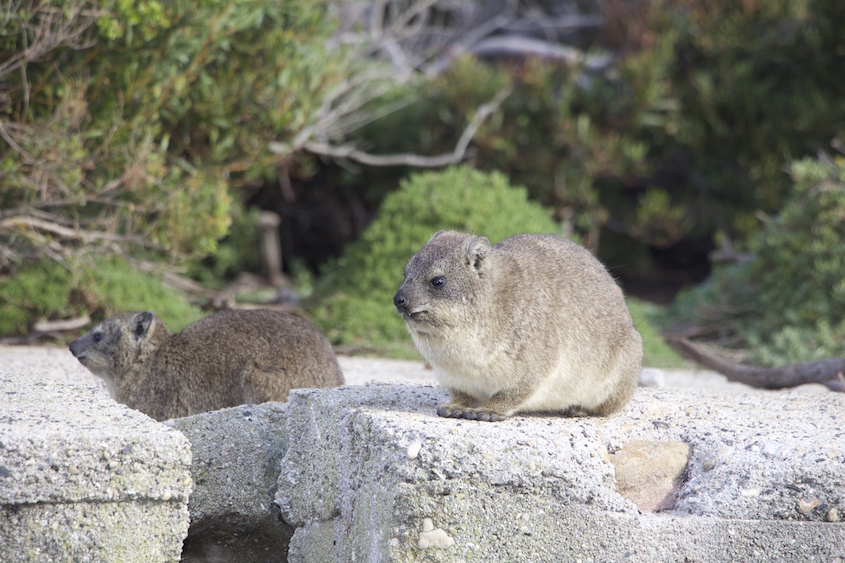 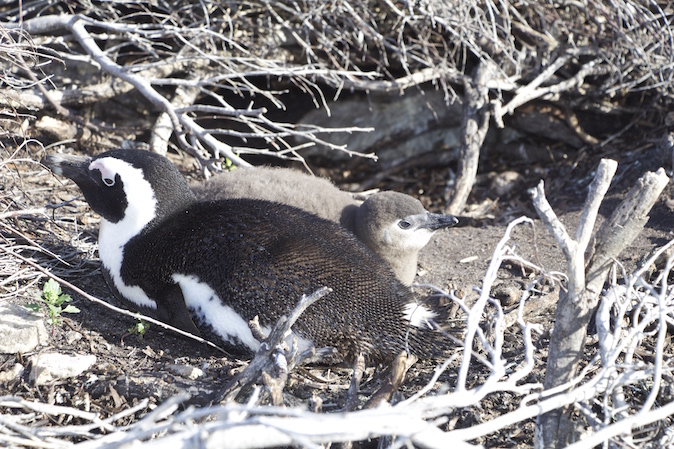 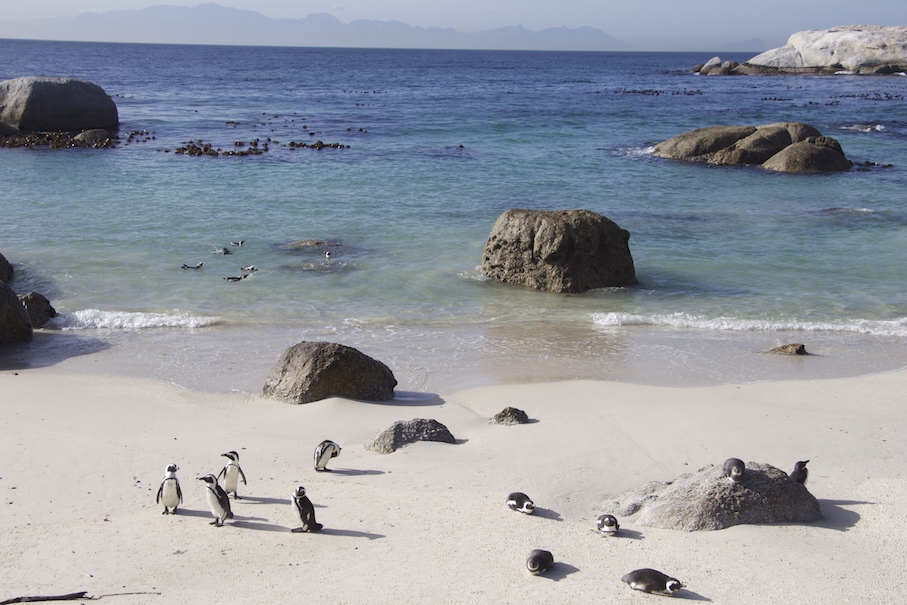 Boulders Beach is world famous for its penguin colony. We think that Betty's Bay is nicer because it is less touristy. - This is a rare photo without other tourists! 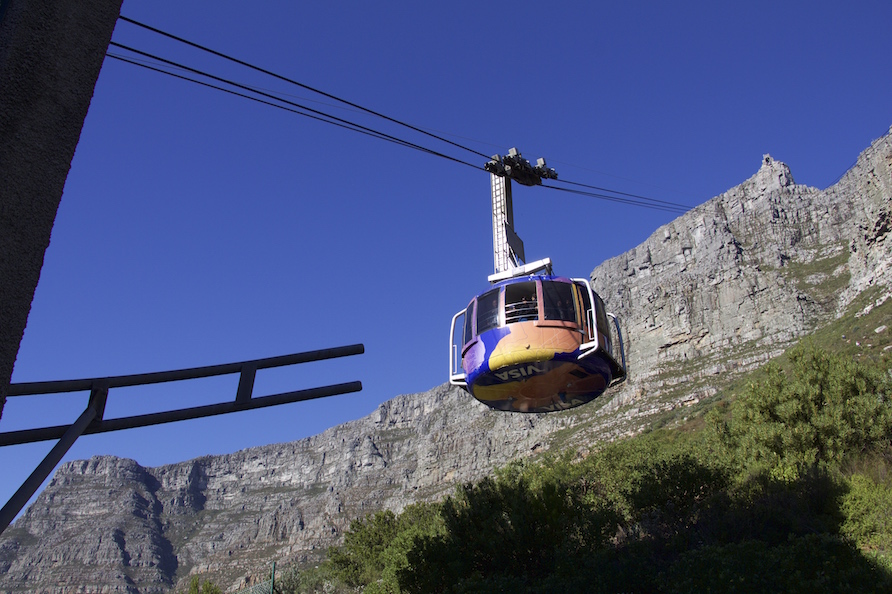 The cable car at "Table Mountain". Table Mountain with its 1085m above sea level is one of the "New 7 Wonders of Nature" 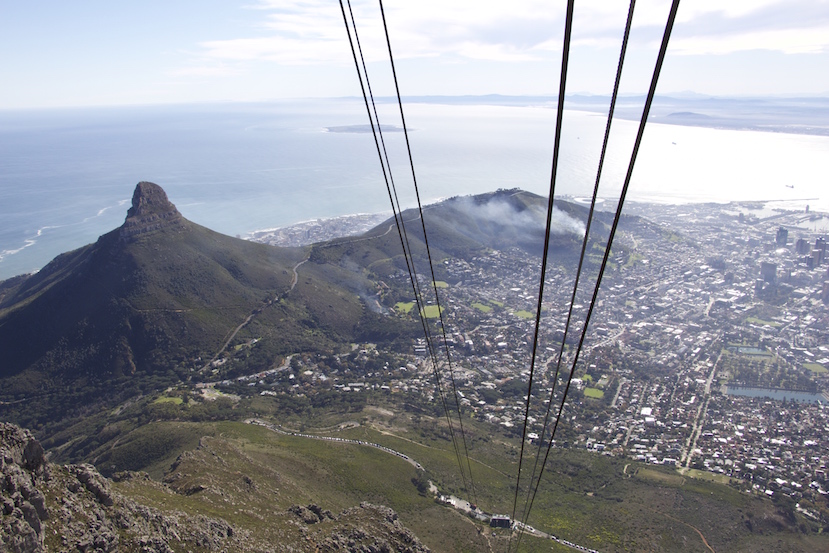 Looking down on Cape Town from the cable car 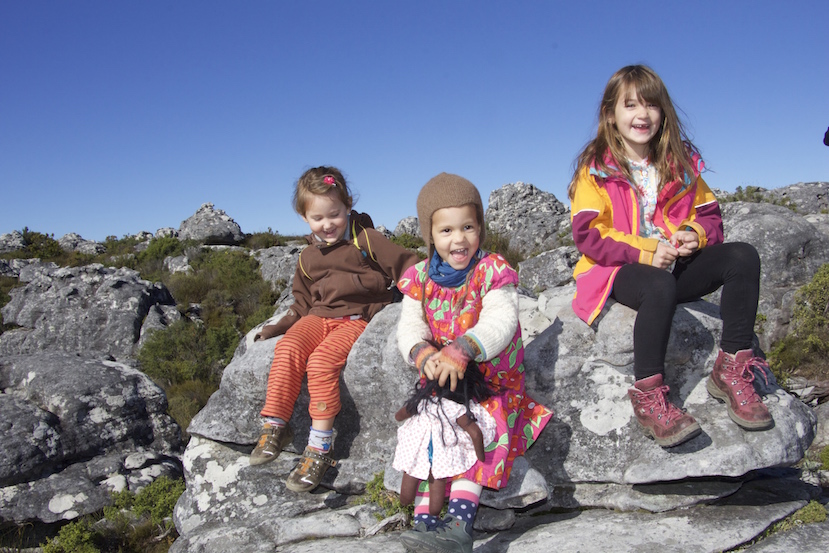 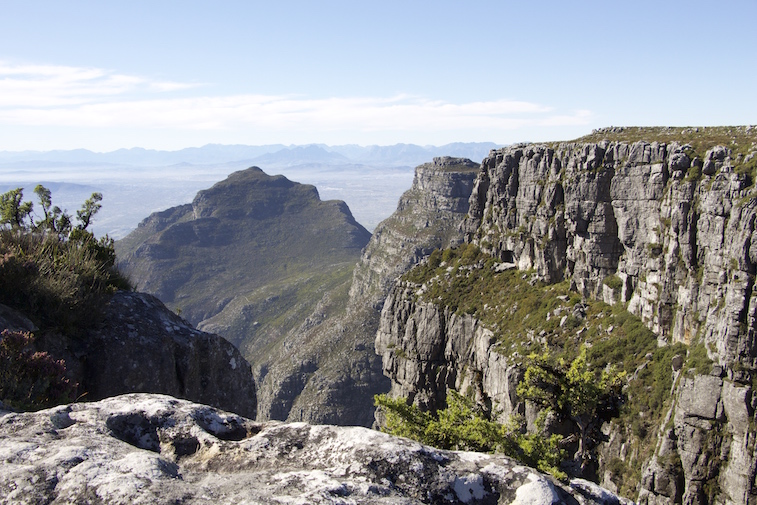 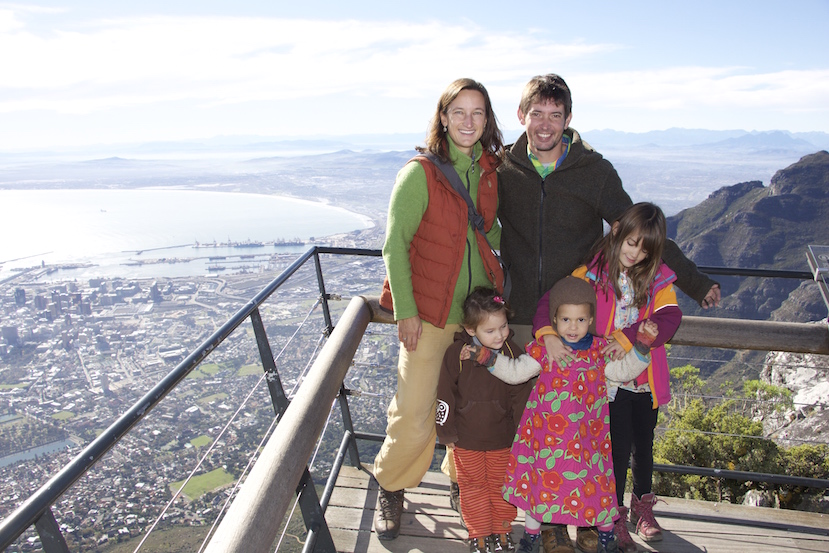 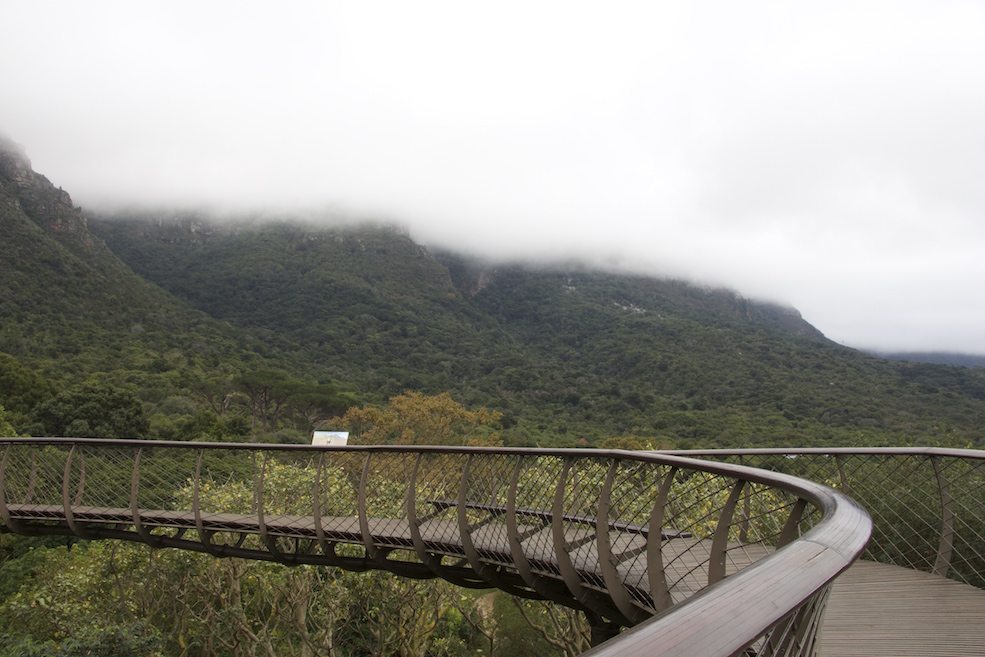 The "Boomslang" at "Kirstenbosch" 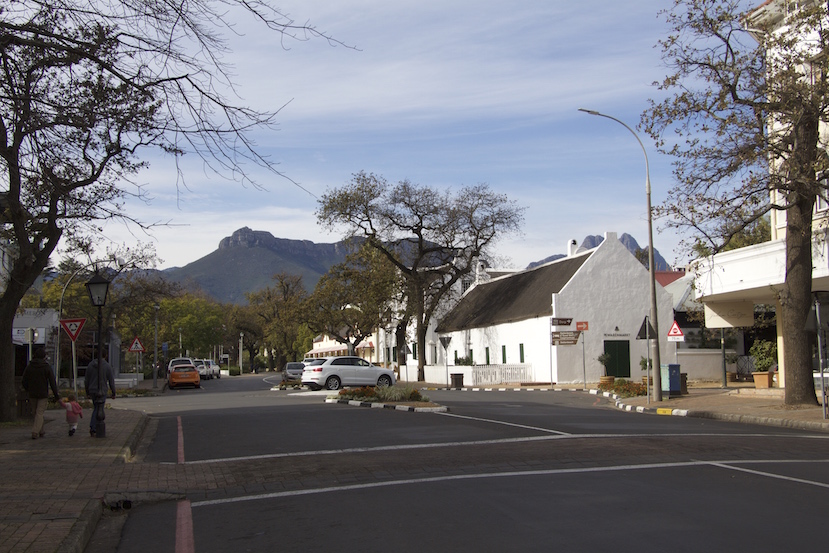 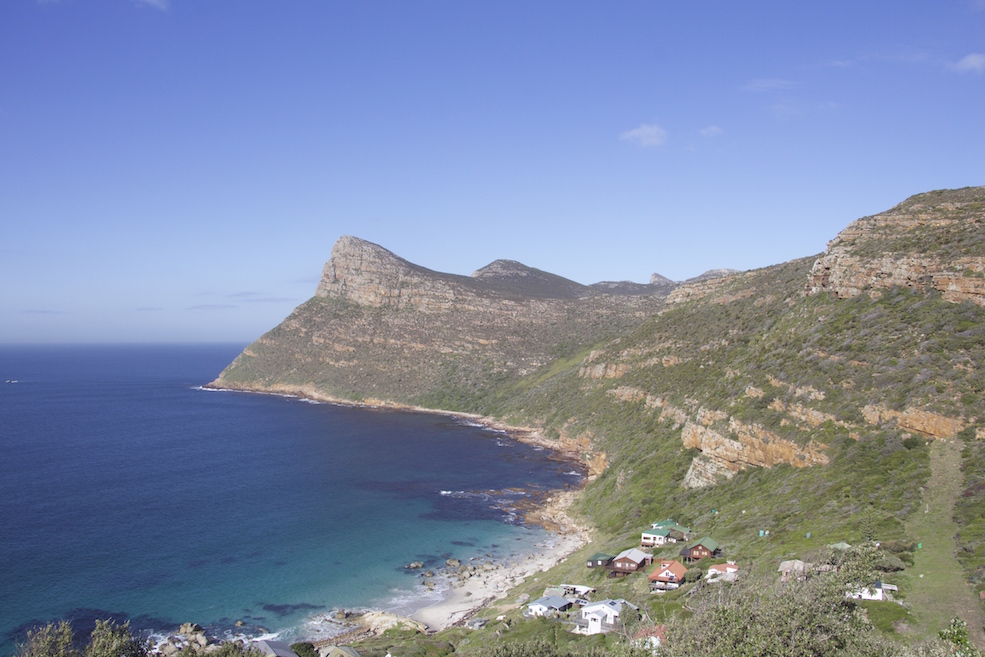 On the way to "Cape Point" ... a small village without cars down at the beach. 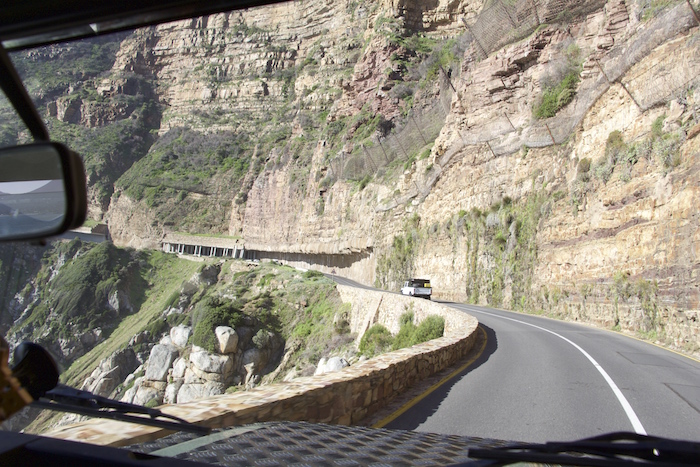 On the way to "Hout Bay" 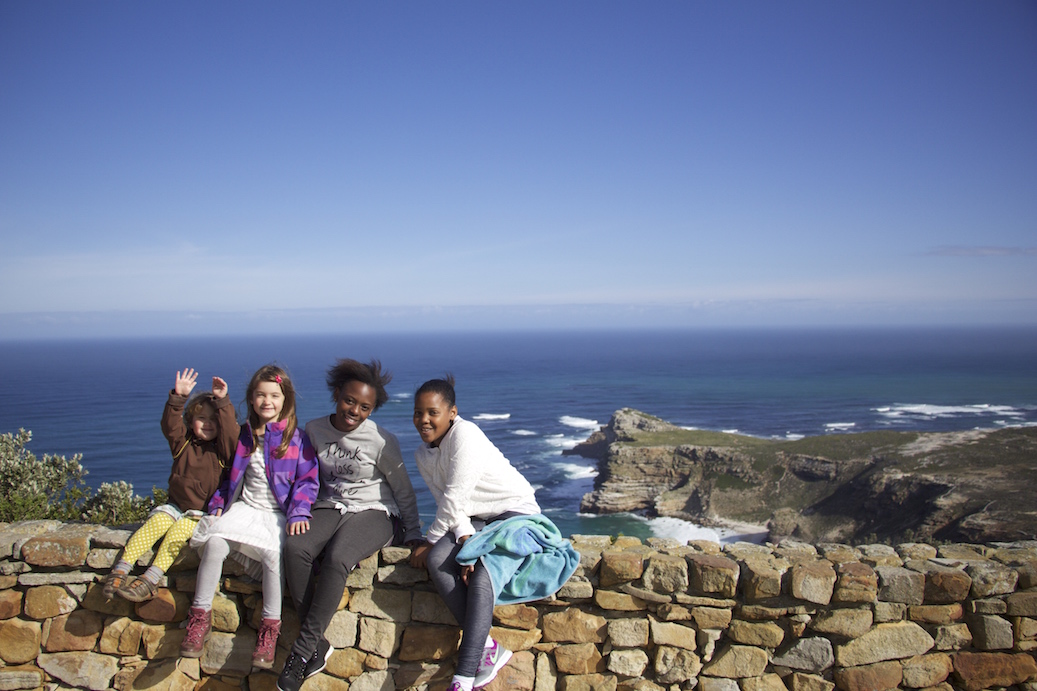 Together with friends at "Cape Point" ... For us "Cape Point" is the "geographical end" of our Transafrican adventure. Personally, we think that the sedately-remote Cape Agulhas, souternmost tip of Africa, is considerably more beautiful.